Even when early previews were quite negative, I remained optimistic that while the game might not be the same level of quality as, say, Sonic Generations, it’d at the very least provide me with plenty of enjoyment and help usher in a new age of good 3D Sonic games. Sadly, that is not entirely the case.

Sonic Forces begins with Dr. Eggman having actually taken over most of the world, thanks to his new McGuffin – the Phantom Ruby (which also appeared in Sonic Mania). In order to take back the planet, a Resistance is formed and it’s up to Sonic, a returning Classic Sonic and your own custom character (the Avatar) to lead the charge.

The plot’s nothing special but it is somewhat entertaining for the most part. While some might be put off by how seriously it takes itself, with a couple of “war is hell” scenes thrown in, there’s still a level of lightheartedness to it. It’s almost aware that it’s a Sonic game so things never get too gratuitously dark, and character personalities are pretty on point, complete with good vocal performances.

The downside is that it’s riddled with missed opportunities. As great as it is to see some of the extended cast back after so long, they don’t really do much outside of provide radio chatter during levels. Sure, we hear about things they do to help the Resistance but we never see any of it. 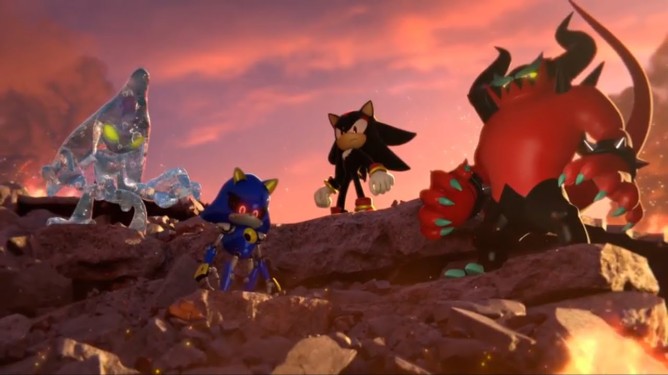 Even worse, though, is Eggman’s villain squad of previous antagonists. Despite advertising the returns of Shadow, Metal Sonic, Zavok and Chaos and them all working together under Eggman, they barely do anything. In fact, Metal and Zavok are the only two you fight, with both Shadow and Chaos being dealt with in a pathetically easy manner in cutscenes, leaving me feeling underwhelmed and cheated.

As for the new baddie Infinite, he feels wasted too. Granted, he’s entertaining thanks to his try-hard edgy design, overall attitude and performance, but we get no real insight regarding his backstory or motivation (at least, in the main game) and, without giving too much away, he exits the story in such a sudden and undignified manner that I couldn’t help but laugh, repeatedly asking “Is that it?” 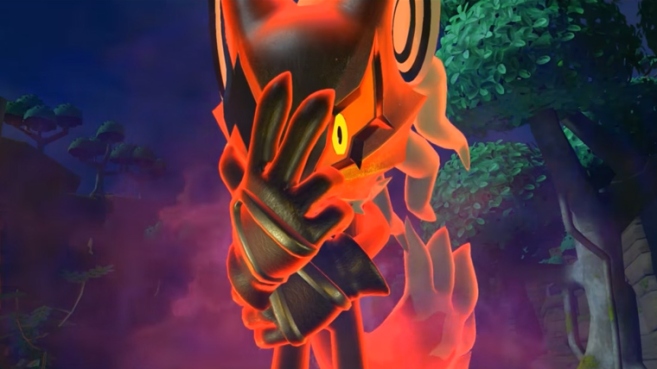 You really get the sense that a lot of corners were cut when you try to analyse the plot, but at the end of the day, that aspect isn’t super important when it comes to a Sonic game. Unfortunately, the core gameplay feels rough and unfinished as well.

There are four different kinds of stages in Forces – one for Classic Sonic, one for Modern Sonic, one for the Avatar and a Tag Team style where you control both Modern Sonic and the Avatar at the same time, and while there’re enough unique features for each of them, they ultimately suffer very similar problems. 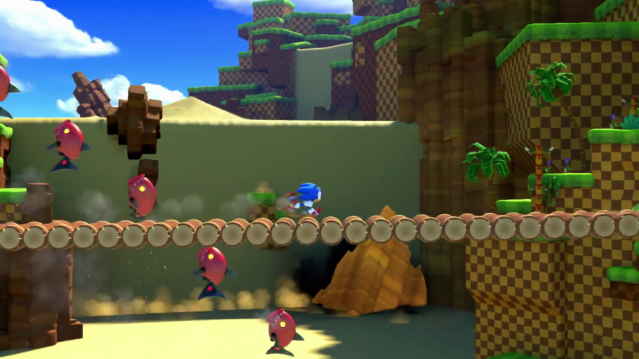 For some reason, jumping feels incredibly stiff with all three characters. Basic platforming becomes almost terrifying because you can’t cover as much ground with a single jump as you could in previous games. Even Sonic’s Double Jump barely helps at points, and the Avatar jumps in such an awkward manner that it’s probably responsible for most of my deaths. It doesn’t help that neither Modern Sonic or the Avatar can readjust their position mid-jump. Once you’ve jumped forward, you have to keep moving forward, which sometimes means overshooting a platform and falling into the pit next to it.

On top of that, several skills are almost unreliable at points. Classic Sonic brings back his Drop Dash from Mania but the game explains it so poorly that I never figured out how to do it until long after I’d beaten the game (not that you’re given much of a reason to use it anyway). And Modern Sonic and the Avatar’s Homing Attack and Quick Step abilities will sometimes just not work. Admittedly, it’s very infrequent but sometimes the reticle for the Homing Attack will appear and vanish in an instant and I had moments where I’d Quick Step to jump to another grind rail, only for my character to not even budge and just slide off into a pit. These are techniques I never had any issues with in previous games so what’s going on here? 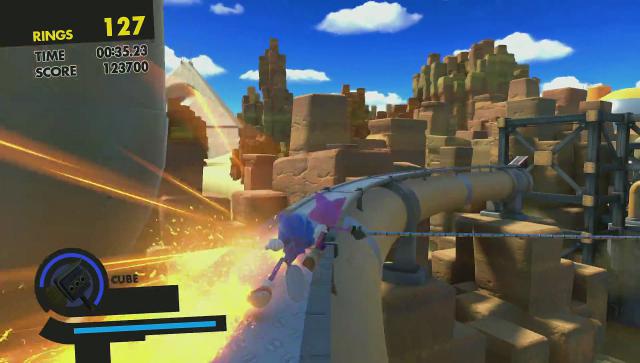 But possibly the biggest issue is how speed and momentum work, by which I mean they don’t. Aside from Modern Sonic’s Boost, it never feels like you pick up speed by your own accord. The only time you ever go fast is when the game allows you, whether it be by placing a bunch of dash panels in your path or straight up taking control away from you for the sake of having a dynamic camera angle, a cinematic QTE or the new Double Boost feature in the Tag Team stages, which isn’t as exciting as it thinks it is since it’s more-or-less automated and exists just to look cool.

Hell, sometimes you’ll find yourself blazing forward at high speeds for no real reason, outside of the game going “Oh, OK, NOW you can go fast.” And even when you do get to go fast, it feels so unwieldy that you’ll want the game to take over for you. Recent Sonic games have been criticised for requiring very little input, and it’s never been more blatant with Forces.

It’s just so bizarre seeing the Classic and Modern stages play so poorly since, at their base core, they’re exactly the same as the ones from Sonic Generations. The developers somehow pulled a copy and paste job but made it worse. The Avatar stages can be even more frustrating, especially on a first playthrough, but they do have some neat gimmicks to them.

While the Avatar lacks Sonic’s Boost and Double Jump, their grappling hook/wire attack is occasionally enjoyable when you swing between grapple points (though there are several times where the game does it for you) and they can be equipped with unique Wispons (weapons based off of the Wisps from Sonic Colours).

The game tries to encourage experimentation by having different types, giving you multiple ways of tackling stages, but, honestly, some Wispons are just way better than others. I personally recommend the Burst and Hover weapons since they’re easy to use, effective when dealing with enemies and, if you grab the corresponding Wisp power-up, they can essentially let you skip any platforming sections. 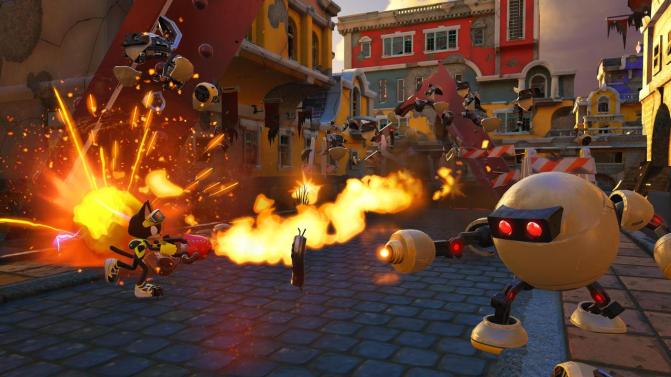 There were plenty of brief moments where I found myself having genuine fun with the game, only for the awkward controls and wonky physics to bring me back down to reality. That’s probably the most frustrating thing about Forces; their is a glimmer of a good game underneath it but all these issues I’ve mentioned hamper it.

If I may don my crazy conspiracy theory hat, it’s like the developers also knew how bad the controls could get so, to compromise, they made the stages incredibly short. I’m not joking when I say that every stage can be beaten in roughly two minutes, assuming you don’t die. Because of this and the abundance of rings that the game throws at you, you’ll be swimming in S Ranks, even if it feels like you didn’t deserve them.

The stages themselves aren’t all that impressive visually either. I mean, they’re not ugly but they feel uninspired and uninteresting. And I know I’m not the only one that’s tired of seeing the likes of Green Hill and Chemical Plant be re-used again. There’s only so much nostalgia-pandering the fans will take, Sonic Team.

At this point, you might be wondering if I have anything genuinely nice to say about the game. Well, I think it continues the trend of Sonic games having consistently good soundtracks. Each of the stages even have different music styles – Classic Sonic is accompanied with tracks meant to sound like they belong on the original Sega Genesis, Modern Sonic gets his usual thumping rock tunes and the Avatar has these cool techno themes, complete with lyrics. I honestly can’t wait for the official release of the soundtrack.

I also think that customising the Avatar is a lot of fun. Sure, it’s not the most in-depth character creator but there’s still plenty of variety in terms of costume pieces, and each of the seven species you can choose from come with their own abilities too e.g. the Bird can Double Jump, the Wolf can attract rings etc. It’s a feature I wouldn’t mind seeing brought back and expanded upon in a future game. Be warned, though – you can only make one Avatar at the start of the game and are stuck with it till the end, with the option to make more only becoming available once you beat the final boss.

And depending on how you look at it, Forces does have some decent replay value. There are various missions you can complete which give you more customisation options for the Avatar and each stage has 5 Red Rings to collect that unlock bonus stages. There’s a surprising amount of collectibles to find since finding all the the Red Rings in a stage makes these Number Rings appear (which you have to grab in a certain order), and getting those makes five Moon Medals show up that you have to get within a time limit, but I don’t think those unlock anything besides Achievements/Trophies so why bother with those?

Aside from that, there’s also the free Episode Shadow DLC, a prequel story focused on the brooding anti-hero that leads into the main plot. It’s way too short, offering only three stages, but it’s nice to be able to play as Shadow in a main series game again. Plus, it actually gives Infinite more backstory, and beating it unlocks the option to play as Shadow in the Modern Sonic stages (well, most of them, anyway).

In the end, though, Sonic Forces is still a massive disappointment. At its worst, it’s a frustrating, unfinished mess. At its best, it’s a mediocre copy of Sonic Generations. When you look at Sonic Mania, you can tell that it was made with so much passion and love for the series. Forces, on the other hand, feels like it was made out of obligation. They had a checklist of things both Classic and Modern fans liked and just kind of them dumped them together without making sure any of it worked, resulting in a title that I don’t think either fan can wholly enjoy.

I think Sonic’s future in terms of 2D games is looking particularly bright thanks to the success of Mania. As for his 3D career, I think Sega and Sonic Team need to seriously think about where they’re going to go with it. The quality that Colours and Generations had is starting to look more like a fluke than the result of actual effort, and I am tired of seeing the 3D games being either bad or average. I am tired of having to approach every new title with slight trepidation. And I am especially tired of giving Sega and Sonic Team second chances.