It’s very easy to make fun of Princess Peach considering her track record for being kidnapped, so I greatly appreciate any game that allows her to be more than the damsel-in-distress and actually take part in any sort of ass-kickery. Take Ubisoft’s strategy RPG crossover – I was already on board with seeing Mario packing heat but even arming sweet, innocent Peach? The image of her holding a giant shotgun is amazing on it’s own but Ubisoft went one step further.

For starters, she doesn’t even get kidnapped, with Mario and his Rabbid friends finding her safe and sound at her castle at the beginning of the game, where she stays right up until the main boss fight of the second world. Your party of three is suddenly confronted with the Icicle Golem, which instantly freezes Mario and whichever two allies you picked.

This is when Peach daintily floats down from on high and, with an almost cheeky grin on her lips, pulls out a shotgun that’s almost as big as she is and uses it to free Mario and one of the other characters, before the Golem removes the other from play by throwing them into the giant fridge behind it.

I just love the weird clash that’s going on here. Peach still has that air of grace and pleasantness that she’s always had but she’s also carrying a big-ass shotgun and will not hesitate to use it. I especially love how after she’s landed on the ground, her and Mario take a badass back-to-back stance before the boss fight.

The scene gets even better if you have Rabbid Peach in your party as well, since she immediately gets jealous of the attention Mario’s giving regular Peach and tries to intervene, though she drops the animosity after the boss is reduced to nothing but a head and allows Peach to deliver the final blow by kicking it into the fridge.

As a character who always needs to be rescued in the main Mario titles, Peach’s moments of genuine heroism and getting to be in the spotlight are always a treat and I only hope she keeps getting moments like this in the future. 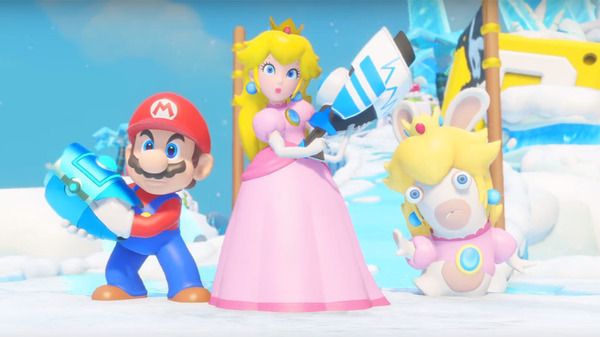