A new Super Smash Bros. game is on the way, which means the Internet is rife once more with debates and theories as to which new characters will get the chance to duke it out with Nintendo’s greatest all-stars. Though now the discussion has changed slightly thanks to the introduction of Echo Fighters.

While it might just be a fancy new term for the long maligned clone characters, people seem to have accepted this idea with fondness. This feature means we can have new characters easily join the roster as glorified palette swaps while still retaining their original personalities. So far, we have Lucina, Dark Pit and newcomer Daisy acting as Echo Fighters for Marth, Pit and Peach respectively, and fans are already wondering if we’ll see any more show up.

Of course, I have some ideas of my own that I’d love to see. So even if we don’t get any new, original characters, here are ten Echo Fighters whose inclusion would make me more than happy.

I’ve seen some people clamouring to see Dixie be added as an Echo Fighter for Diddy, which I would be OK with (apparently she was considered to be made playable in Brawl), but I’d honestly much rather see her as her own character. Now, Funky is a slightly different story.

True, there could be an argument made for Funky to be an original fighter too, but I honestly can’t think of much that could be done to make him stand out aside from maybe using his surfboard for certain moves. I think he’d play too similarly to DK, so why not make him an Echo Fighter? Much like Daisy, he has enough personality to stand out on his own regardless. And with him appearing recently in the Switch version of Tropical Freeze as a new playable character, I think it’d be pretty appropriate to see him show up in Smash too.

The F-Zero franchise certainly has it rough. Whenever its fans aren’t praying for a new game to be made, they’re having to make do with Captain Falcon’s appearances in Smash. So I think it’s about time they get thrown a bone by having a new character be included. The F-Zero games have quite the colourful roster themselves and since Falcon’s main rival, Samurai Goroh, is more likely to return as an Assist Trophy, how about we make super-villain Black Shadow the new playable character?

Admittedly, I don’t know a lot about Black Shadow outside of that he’s evil but you don’t exactly need deep characterisation to be in Smash. Plus, as far as I’m aware, he’s never been shown engaging in physical combat (since he’s, you know, from a racing game) so having him as an Echo Fighter for Falcon wouldn’t be too much of a stretch. It’d certainly make more sense for him to share a moveset with Falcon than Ganondorf. And Smash could always do with another villain in its roster. 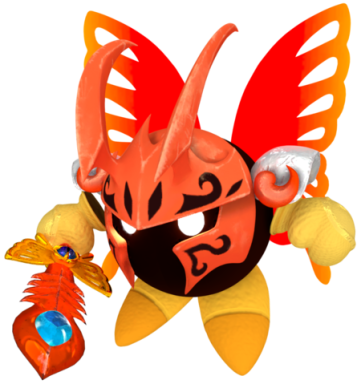 I’ve seen a lot of people pushing to see Galacta Knight appear as an Echo Fighter for Meta Knight and I would be right there with them if we hadn’t already seen this image of him as an alternate costume. Adding him as a separate character would be kind of pointless. So why not go for the next best thing and instead include his successor – Morpho Knight.

This dude appeared very recently as a bonus boss in Kirby Star Allies and he left quite the impression. Aside from having a pretty sick design, he’s apparently even more powerful than Galacta Knight and his boss fight demonstrated that quite well. Hell, just read this part of his boss description – “On the day of judgement, this fluttery fiend will fly into action. Brought into existence by “the greatest warrior in the galaxy” and reborn as a knight of doom through years of adversity…”

While he’d obviously be toned down for Smash, I think he’d make a great alternative to playing as Meta Knight and we won’t have to wait for another Kirby game for a potential second appearance.

Yeah, I think we all saw this coming. Even since the days of Brawl, fans have wanted to see Shadow appear in the series, even as just a palette swap of Sonic. But his being an Assist Trophy seemed to get in the way of that… until now. Granted, nothing’s been confirmed yet but with Knuckles appearing in Ultimate as the Assist Trophy rep for the Sonic series, could this mean Shadow will show up?

While not an accurate description of his character, Shadow has always been a Sonic clone. He looks like him, is as fast as him, has a lot of the same abilities and the two have been rivals ever since his first appearance. Most of his appearances usually involve the two of them getting into a scrap so it’d be great to see the two duke it out in Smash. Sure, Shadow’s Chaos powers give him a little bit more of an identity but, aside from those, he’d probably end up playing just like Sonic anyway so may as well give him the Echo Fighter treatment and give players the joy of seeing this edge-lord getting into fights with Jigglypuff and the Duck Hunt dog. 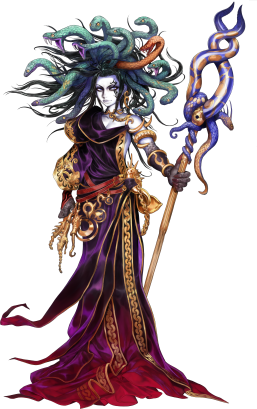 This is one of those ideas that I absolutely love but I never would’ve considered it unless someone else had suggested it. Despite being the Kid Icarus‘ series main villain, Medusa seems to often be forgotten about when it comes to the series’ cast. It’s probably because she’s a traditional villainess while the likes of Viridi, Thanatos and especially Hades are brimming with a lot more personality.

But while she may not have been as “zany” as them, Medusa was still an effective bad guy. She was deliciously devious whenever she was on screen and has a killer design, so I think she should be given her dues and become an Echo Fighter for Palutena. She already has a staff a lot like Palutena’s and their statuses as gods means it wouldn’t be too out of left-field for them to share abilities. And besides, the roster could do with a female villain to spice it up.

I’m honestly shocked that I never considered Ms. Pac-Man as an option until I saw someone else come up with the idea. In fact, why wasn’t she in the last game as a palette swap of Pac-Man? Seems like a real missed opportunity and one that Ultimate can make up for.

This one would probably be one of the easiest Echo Fighters to make considering the two already look very similar. Seriously, add some eyelashes, full lips, a bow and change the shoes and you’ve got Pac-Man’s lovely wife ready to trade blows. While I would much prefer seeing another Bandai Namco character like Klonoa or even Lloyd from Tales of Symphonia, if they don’t have the time or resources to include a brand new face then Ms. Pac-Man would be a more than satisfactory addition, if only to see her and her husband team up.

Now this one is an absolute no-brainer. Ryu may be the poster boy for the Street Fighter series but, wherever he shows up, his brother from another mother Ken Masters is usually not too far behind. And while nowadays, the two have enough differences in their home games to be considered separate characters, there was a time when they played almost exactly the same.

So having him as Ryu’s Echo Fighter makes too much sense. They could even alter his special moves with some additional visual effects if they wanted to make him stand out a bit more from Ryu, like maybe his Tastumaki Senpukyaku deals fire damage or something. Much like the Ms. Pac-Man example, I would much rather see Capcom lend another character to the roster, specifically Phoenix Wright (LET ME DREAM) or even Chun-Li if they want to put another Street Fighter rep in, but Ken’s inclusion would still be awesome to see, especially since he would probably return to his classic design and not have the banana-hair he has in Street Fighter V (fans did not like that). 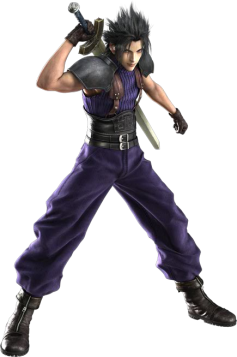 OK this one will probably never happen but I also never thought Ridley would be made playable so I guess anyone’s fair game (HAH!) at this point. Besides, having Zack appear as an Echo Fighter for Cloud makes way too much sense, especially if you’re familiar with FFVII‘s story.

Hell, Zack uses the exact same weapon as Cloud and shares a lot of his fighting skills. He’d also make a great antithesis to Cloud, being much more loud, outgoing and friendly compared to the somewhat more reserved and quiet Cloud. Ideally, he’d be reprised by his voice actor, Rick Gomez, though considering Cloud didn’t get any English voice acting in Smash, Zack would most likely get the same treatment (I’m still hoping they change this for Ultimate and bring Steve Burton back to record new lines for Cloud).

Again, it’s very unlikely that we’ll ever get another Final Fantasy rep for the Smash Bros. series but stranger things have happened and Cloud even being in the game to begin with is proof of that.

Again, this is one of the more obvious choices and, while Bayonetta already has a colour scheme that references Jeanne, I think there’s still a chance she could be included as her own character (I mean, Mario had Wario-themed colours in previous games despite Wario being a separate character).

Aside from a change of clothes and hair colour, Bayo and Jeanne are very much the same character in terms of fighting styles and abilities; something anyone that has played Bayonetta can tell you. All they have to do is make a Jeanne model and slap it over the Bayonetta one and, boom, new character (and maybe change the Bat Within move so its moths instead of bats). It’s been a while since her and Bayo were on opposite sides; Smash would be the perfect place to see the two battle once more, though it will be much sillier with all the shells and hammers flying all over the place.

Although the Inklings were confirmed several months before we even knew Super Smash Bros. Ultimate‘s title, it wasn’t until I saw them in action that I realised how cool it’d be to also include the Octolings as playable characters too. Splatoon fans had wanted playable Octolings even in the first game and Splatoon 2‘s DLC made that possible. And after playing the Octo Expansion myself, I want these cutie patooties in Smash more than ever.

I just really love the Octoling design, especially for the ones you control in the DLC. Their black leather outfits combined with their slightly more neutral facial expressions makes them the perfect counterpart to the peppy and excitable Inklings. And the only aspect of their movesets that would need to be altered would be changing the Inklings’ transformations into squids to octopuses instead. Splatoon does have some solid representation in Ultimate already but if we’re not going to get many new, original fighters, may as well extend the love to the formerly generic enemies and let them join in on the smashing fun.