When I found out that a live-action movie based on Paddington Bear was being made, I was naturally sceptical. And so was everyone else, apparently. I know one shouldn’t jump to conclusions but just the idea that someone wanted to make a live-action Paddington movie in 2014 just made me gag a little. I don’t hold a lot of nostalgia for Paddington but I remember catching a few episodes of the original TV series where Paddington himself was animated in stop-motion but the humans and his environments were in 2D, and I even had an audio tape of some of the original stories. It may have only been a small part of my childhood but I remembered it fondly and, naturally, me and the rest of the world weren’t holding our breath for a ‘modernised’ take on the character. Even the author of the original books, Michael Bond, wasn’t looking forward to it.

Then the film came out and I started to hear good things about it. Not in an “it’s not as bad as we thought it’d be” way but in an “it’s actually really good” way. I even checked out a trailer where we actually got to hear Paddington speak and I found myself actually liking it. So once the opportunity to watch the film arrived, I took it, and how was it?

Well, first the plot. The original books had a very simple premise. An English family called the Browns are walking through Paddington Station when they spot a bear in a hat and coat, sitting on a suitcase; with a label that says “Please look after this bear. Thank you” (something that was inspired by Michael Bond’s memories of child evacuees during World War II). The family proceed to adopt the bear (as you do) and give him the nickname Paddington (three guesses why). From then on, it was just Paddington getting into all sorts of misadventures as he adjusts to London life.

Now, this kind of plot can’t really fill up an hour-and-half running time so a lot more has been added and tweaked in order to suit the film. For starters, we actually see where Paddington came from. It’s always been stated that he was raised in “darkest Peru” but the film not only shows glimpses of his life living in the jungle with his aunt and uncle but it also explains how he can speak. … Yes, you read that right.

In the first five minutes of the film, we see an explorer journey into the wilderness and encounter Paddington’s aunt and uncle, who turn out be a rare species of bear that possess some level of human intelligence. He befriends the two bears, giving them English names and a bunch of English memorabilia, including books and a phonograph that teach them how to speak English, as well as some jars of marmalade. It’s really surreal to see but not in a way that feels like it ruins the original source material. It’s actually kind of funny how seriously the film takes this revelation and there’s technically nothing wrong with explaining how the bears can talk and why they love marmalade so much. Anyway, I’m getting side-tracked; back to the plot.

Paddington is living with his aunt and uncle, when a terrible earthquake hits, destroying their home and killing his uncle (a move that I feel is kind of unnecessary). His aunt, too weary and tired to look after him, puts Paddington on a boat to London and tells him to track down the explorer from the beginning of the movie, whilst she goes to the Retirement Home for Old Bears (yes, that’s a real thing in this movie).

Paddington soon arrives but doesn’t quite get the British welcome he was expecting. Stuck at Paddington Station, he soon crosses paths with the Brown family. Mrs. Brown takes a strange shining to him and, out of sympathy, allows the bear to come home with them until they can find the explorer.

Simple, right? Not entirely. Unbeknownst to Paddington, his arrival reaches the ears of Millicent, a taxidermist at the Natural History Museum who, for whatever reason, wants Paddington for herself.

That’s the basis of it and, for a family film, it works. It manages to have that ‘film’ feeling where the stakes are slightly higher than usual without being so complicated that children get completely lost trying to make sense of it all. If you’re not a fan of simple plots, that still shouldn’t be an excuse to dismiss the film entirely because it’s got so much more going for it.

First of all, the acting. It’s just splendid. Ben Whishaw (who played Q in the Bond movie, Skyfall) is pretty much perfect as the voice of Paddington, capturing that wide-eyed naiveté that makes the character so endearing. I think that it’s much harder to make an audience feel for an animated character simply because they don’t look real or human but Whishaw’s acting and the animation pull it off. It might be a bit weird to see Paddington looking more realistic than usual but it’s done so well, particularly his facial animation.

The rest of the cast are fantastic too, with Hugh Bonneville from Downtown Abbey perfectly cast as the stuffy and overly safe Mr. Brown, Sally Hawkins as the sweet but slightly scatter-brained Mrs. Brown; even the two child actors that play the Browns’ children are great, especially the daughter who manages to pull of the whole ‘moody teenager’ thing without being unbearable.

Nicole Kidman also does a superb job as the villain, playing her character completely straight to the point where whenever she’s on screen, you just feel really uncomfortable and tense. The film’s tone gets, like, 20% darker when she’s around.

I also want to mention Peter Capaldi (the Doctor himself) as grumpy neighbour Mr. Curry, mostly because his character made me realise that watching Paddington with a modern mind-set turned an allegory for the evacuees into an allegory for racism. I’m serious; Mr. Curry is a massive bear-racist in this movie. I could be reading too much into this but Paddington feeling so alone when he first arrives in London and a couple of characters’ treatment towards him does mirror real-life somewhat. Just something to keep in mind.

Going back to the acting for a bit, arguably the best thing about it is how well the actors interact with Paddington. During filming, they had to spend many scenes essentially talking to thin-air. It’s hard for an actor to interact with a character that isn’t there, but everybody pulls it off and it makes the funny scenes funnier and the heartwarming scenes more heartwarming.

Speaking of funny; well, the film’s pretty funny. Naturally, there’s a large amount of slapstick and the like to keep the kids happy, including a scene where Mr. Brown has to disguise himself as a woman (if you want context, go watch the movie). It’s harmless, though, and the slapstick did make me giggle a little bit if only for how insane it got, particularly a very subversive chase scene where Paddington attempts to return a dropped wallet to a wallet thief.

If you’re worried about there being any toilet humour or the like, don’t be. A lot of family/children movies love to add unnecessary poop and fart jokes (because that’s what passes for comedy, apparently) but the people who wrote this film thankfully avoided that pitfall. The closest it gets is when Paddington uses Mr. Brown’s toothbrush to clean his ears and then very briefly licks his own earwax. Needless? Yeah, but at least it’s quick and nothing like it happens again.

Honestly, though, I found myself laughing more at the verbal humour than the physical stuff. Probably because I have matured over the years (well, as mature as a man in his early 20’s watching children’s films can get). Again, most family films try to keep adults invested with random swearing and dirty jokes that kids don’t get. While the verbal stuff will probably go over most kids’ heads, it’s well-written and genuinely funny. One of the simpler ones is Mr. Brown attempting to say Paddington’s real name by poorly imitating Paddington’s bear roar, to which Paddington, with an offended look on his face, responds with “Mr. Brown. That was dreadfully rude.” There’s plenty more that surprised me with how humorous they were but I won’t ruin them.

Easily the funniest joke in the whole film, however, is just the mere sight of Paddington casually wandering the streets of London and nobody batting an eyelid. I mean, they acknowledge that he’s a bear but they react with mild surprise rather than genuine shock and awe at the hyper-intelligent bear. It had me giggling all the way through.

The film feels timeless as well. Even though we see modern day trains and other hints towards modern day, there are also still rotary phones and such. There’s no definitive time period, which helps prevent the film from feeling dated if you go back to watch it maybe ten years from now.

I also love the visual aesthetic of some shots, especially the darker ones. You can almost feel the chill run down your spine during those scenes. In fact, I’m surprised how dark the film was willing to go. It’s not dark in a ‘gritty’ sense; it’s perfectly unnerving given the kind of character we’re dealing with. You don’t associate something as innocent as Paddington with any kind of dark nature – the climax in particular, which I really enjoyed. I even got tense at one specific moment even though I knew what was going to happen. Needless to say, I was impressed because despite how well written it is, Paddington is a very predictable movie.

At its most basic, it’s a fish-out-of-water story and we’ve all seen plenty of those in our lifetimes. You’ll recognise all the story beats and you’ll have figured out the ending before you’ve even put the film on, with the exception of one twist that I personally did not see coming.

Predictable as it may be, Paddington is still entertaining and strangely captivating. Everybody who worked on this film clearly had a lot of love for it and wanted us to love it just as much as they did, and I think they succeeded. And if this review isn’t enough to convince you, then how about this?

Remember when I said that even Michael Bond wasn’t looking forward to it? Well, apparently, after seeing it, he did a complete 180 and said it was good. If that’s not enough of a reason, I don’t know what is. 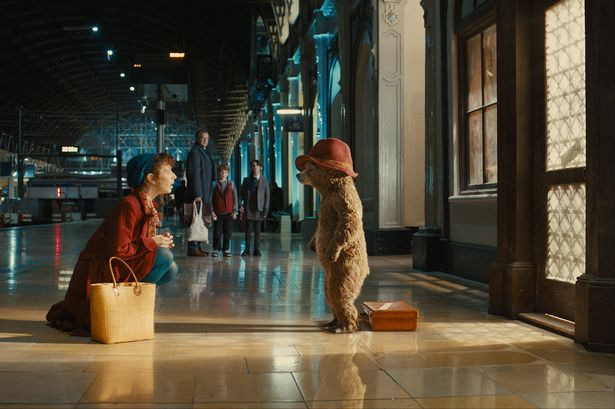 One thought on “Paddington – Beary Good”