Persona 4 is, without a doubt, one of the best JRPGs ever made. Anybody who’s played it will tell you that, which is probably why some people got a bit mad when Atlus started milking the crap out of it. Two fighting games, two different anime series, a crossover with Persona 3 and, today’s subject, a rhythm-action game.

Personally, while I understand some people’s frustration, I had no issues with these because 1. any opportunity to spend more time with these characters was a welcome one for me, 2. the money made from these would help fund other projects (coughPersona5cough) and 3. they were fun to play anyway. And for me, it was, bizarrely, the rhythm-action game that had me most excited.

At the time, I had only recently found myself becoming a fan of the genre thanks to the likes of Theatrhythm: Final Fantasy and the Project Diva games, so having a game like that but with Persona 4 music was a welcome one. But did the game live up to my admittedly lofty expectations? Can someone who isn’t a fan of the series enjoy it? Or does it alienate even the Persona 4 fans? Well, that’s what this review is all about.

First the story. Yes, there is actually a story in this game. Dancing All Night is set after the events of Persona 4; idol Rise is planning to make a comeback but she asks her friends to help her by acting as back-up dancers for her performance at an upcoming festival. During their practice sessions, however, they hear of a rumour about a cursed music video featuring a dead idol – if you watch the video at midnight, you are dragged to the “other side.” While that may sound like complete nonsense, the Investigation Team suspects that there’s some truth to it… and they’re right. 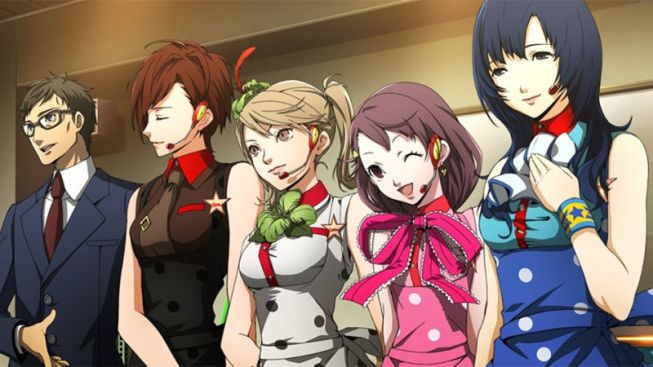 Shortly afterwards, the members of another idol group, Kanamin Kitchen, go missing and the team quickly deduce that they’ve been dragged to the “other side” – a world called the Midnight Stage, and it’s filled with Shadows (the monsters from Persona 4).

In this world, the team realise that they can’t physically attack the Shadows – the world itself forbids violence – but they have an alternative. Three guesses what it is. Yep, it’s dancing. So, the team must save the kidnapped idols by using the power of dance to defeat the Shadows in their path and to find the culprit responsible.

Meanwhile, new character Kanami Mashita (AKA the idol Kanamin) attempts to solve the mystery of the missing idols in the real world, alongside detective Dojima and his daughter Nanako (both returning from Persona 4), the latter of which soon finds herself becoming Kanami’s new dance partner.

This is a very brief summation of the main plot; there’s a lot more going on here than you’d expect in a dumb dancing spin-off. Without going into too much detail, the story, while incredibly simple, is very entertaining, if only for how the characters interact with each other and react to the whole “defeating monsters with dancing” thing. Not to mention it still feels like a Persona plot, with a pretty engaging mystery, tackling the classic themes of friendship and making bonds, as well as presenting the tribulations that idols face. The whole thing actually feels like a damning presentation of the idol industry in Japan and could easily be applied to celebrity culture here in the West, but that’s a discussion that would take too long to really explain.

The end result is a story that, like I said, is fun to experience, enjoyably silly at points and feels very much in line with the rest of the series. I would say it gets too talky at times (it takes what felt like two hours to even get to the first dance) but that’s to be expected really given the series.

It’s not particularly hard to play through either. You only have two difficulties to choose from regarding the dances (Easy and Normal) which means that getting through the gameplay segments shouldn’t be a hassle if you’re not experienced enough with rhythm-action games but just want to enjoy the story.

In fact, you don’t even need to play the story at all. Playing through it just earns you some trophies and money you can spend in the in-game shop. The way you unlock new music tracks is just by playing in Free Dance mode, which very much becomes the main crux of the game once you’ve cleared/aren’t interested in the story.

Oh crap, I haven’t even mentioned the gameplay, have I? Well, it’s very simple. Notes will fly out from the centre of the screen towards target areas placed on the left and right hand sides of the screen. All you have to do is press the corresponding button when the Note overlaps. You use the left, up and down buttons on the D-Pad for the left-hand side and the triangle, circle and cross buttons for the right-hand side.

However, your aim isn’t just to clear the track. At the top of the screen, there’s the Hype Gauge. See, you’re actually performing to an audience and you need to keep the audience interested. Miss too many Notes and the audience will get bored and you’ll instantly fail the song. Not only that, but if their ‘hype’ isn’t high enough by the time you clear the song, you’ll still fail it.

The best way to ensure you clear the track (aside from playing well, obviously) is by hitting the Fever Rings. These function exactly the same as the Scratch Rings, except if you manage to hit three of them, it’ll activate Fever Time at a certain point in the track. Once in Fever Time, not only does it bolster the audience but it’ll increase the amount of points you get and your combo won’t break if you hit a Note too late or too early (it won’t protect you, though, if you straight up miss one).

Honestly, though, once you get the hang of it, Dancing All Night is not a super-hard  game to play. At least compared to certain other rhythm-action games (looking at you Project Diva!). That being said, there’s still enough of a challenge there for experts of the genre. All Night difficulty can be especially stressful.

Plus, there are special items that you can purchase from the shop that can either make playing the game easier or harder, affecting your final score and how much money you earn. Also, unlike Project Diva, the items aren’t consumables – you buy them once and you can use them whenever you like.

The shop is also where you’ll buy new costumes and accessories for the characters; the majority of them being references to the original game. There’s a crap-tonne of costume DLC as well that I can only really recommend to the most die-hard of Persona 4 fans. Only they will appreciate seeing Nanako cosplaying as the Magical Witch Detective or Kanji wearing nothing but seaweed. 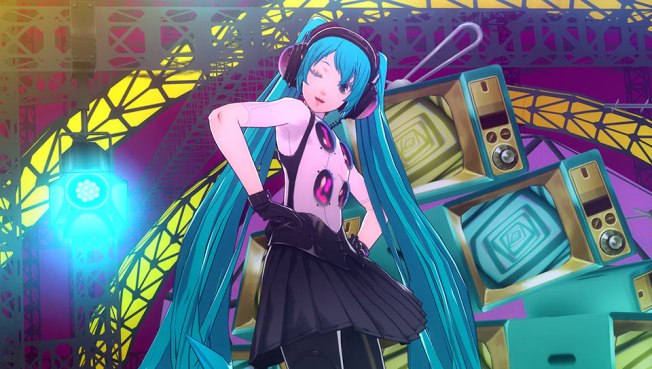 That being said, there are also plenty of DLC tracks as well, which are perfect for extending play time or if you just want more songs to play to. Three of them even come with unique characters, including special guest Hatsune Miku.

I should actually go into the music itself, shouldn’t I? I mean, it IS a rhythm-action game; the kind that puts a heavy emphasis on music so it’s kind of important. Fortunately, its soundtrack is sublime, containing pretty much every vocal track from the original game, and even a couple from the spin-offs (as well as a few instrumentals). Granted, there aren’t that many tracks to begin with but Dancing All Night tries and make up for that by including remixes of those tracks, which is no bad thing as they’re all, at the very least, pretty damn good.

I personally never felt it was lacking in content since the remixes had their own style to them – they could stand on their own. And like I said earlier, there’s extra DLC tracks too if you’re desperate for more.

But what ultimately makes Dancing All Night stand out is its presentation. What do I mean by that? I’m referring to the fact that every track (with some exceptions) comes with a fully choreographed dance number. It’s not a big deal in the grand scheme of things but seeing the Investigation Team + Nanako busting a move to the music was what primarily motivated me into buying the game.

Not only is it such a joy to see these characters being so animate, but the dances perfectly fit their respective styles and personality. Chie incorporates kung-fu kicks, Yukiko twirls like a ballerina; they help make the character feel more alive and, quite frankly, are just fun to watch as well.

Plus, if you hit Fever Time, another character will join in with the dance for a while. Again, it’s a little thing but to a Persona 4 fan, there’s something amazing about seeing it that’s hard to explain to someone who isn’t as well versed with the world or characters. They’ll even provide moral support throughout the dance as well (though you can turn that off if you find it too distracting). And at the end of certain tracks, the dancer will summon their Persona, who caps things off with a quick performance of their own. Again, it’s a little thing but it’s hard not to enjoy seeing these strange, mystical creatures suddenly jamming out on guitars or trumpets.

In the end, Dancing All Night is an enjoyable and functional rhythm-action game that offers accessibility to noobies and a great deal of challenge to experts. Is it something I can recommend to a non-Persona 4 fan? Probably not. A non-rhythm-action game fan? Even less so. But if you’re just like me and have an affinity for both Persona 4 and this genre, then you’ll definitely enjoy that it has to offer.

And if you’re just a die-hard Persona 4 fan that just wants to experience a new adventure with these characters, regardless of gameplay, then I can think of no better send-off before Persona 5 takes over our lives. 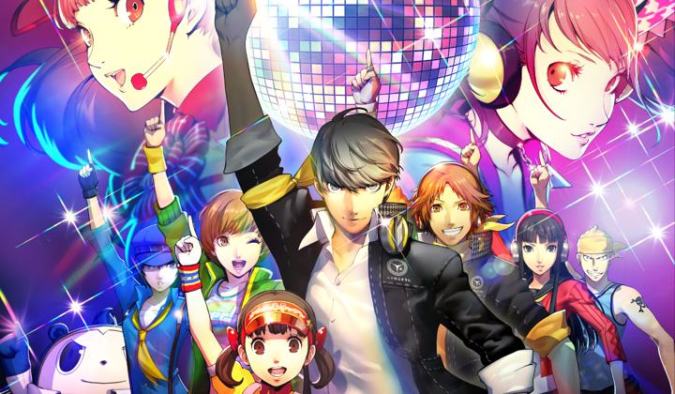 3 thoughts on “Persona 4: Dancing All Night – Pointless Party or One Last Hurrah?”