Anyone here remember Heroes? I do. Well, did you know it’s coming back? I remember rumours surrounding the show’s revival circling around a bit for a few years and it seems they held a bit of truth to them. The show was incredibly popular during its run and quickly expanded into other media that fleshed out the universe and told their own stories. It eventually ended after four seasons in 2010 and… boy, what an abrupt and unfulfilling ending it was.

There was no finality to it and what’s worse, it ended on a bloody cliffhanger. I can’t remember if the show was cancelled or not but I’m willing to believe that was the case because Heroes had very much lost its luster a long time ago. But it’s clear that the show still has its fans otherwise it wouldn’t be getting a continuation. This brings me to my question: is it worth watching it or even caring about it? Obviously, this is a hard question to answer since the show’s not out yet but let me try to sum up my reasoning.

Let’s start with my introduction to Heroes. While the show debuted in 2006, I don’t think I actually started to watch it until 2007, which was the year BBC 2 began airing it. My mum had seen adverts for it and suggested that I should watch it, since she thought it would be to my liking and she wanted something for her, me and my dad to all watch together. I was initially dismissive since I was about 14 at the time and was even more hesitant to watch new things than I am now. However, my mum made me promise to watch the first ten minutes and if I didn’t like it, I didn’t have to watch it. Much to my own chagrin, I actually really enjoyed it.

The first season followed the exploits of several characters who discover that they have superpowers. As they each struggle to adjust (some dealing with it better than others), they find themselves crossing paths with each other and all manner of drama occurs. But there are worse things on the horizon for them. A mysterious man working for an equally mysterious corporation seems to be hunting down people with powers, there’s a super-powered serial killer doing the same thing for his own sick desires and there’s an ever-looming prophecy that tells of an explosion in New York City that will not only kill many people but lead to the end of the world as we know it. Sounds exciting, right? Well… it was.

It had an interesting plot, a range of varied characters each with their own unique struggles and was, ultimately, fun. I was on edge throughout the whole thing; even though it was on Thursday nights, even though I knew I had to be up early for school the following morning, I couldn’t wait. I had to see what happened next.

So when the season ended on a cliffhanger, I was immediately pumped for the second season. But even as a dumb teenager, when it actually started, I knew something was wrong. Admittedly, it’s been a really long time since I’ve watched the show so my memories are a little hazy but there was something about all the seasons following the first that just felt… weak. My enthusiasm slowly dried up; I began watching the show for the sake of it, hoping that I was going to be wowed later on – maybe it would recapture what made the first season so great. My dad quickly dropped out before Season 2 even started and even my mum began to lose interest but I carried on, right up until that anti-climatic final episode. My reaction wasn’t “Oh man, can’t wait till the next season.” It was an exasperated “Oh my God, they’re still going.” When you find yourself wanting a show you love to end, that’s a very clear sign that it’s no longer good.

I can’t quite pinpoint why the show stopped being good; I think it may have been a multitude of things. Firstly, I believe there was a writer’s strike during Season 2’s production, so that didn’t help matters. It showed as well (I’d say Season 2 was the worst one)  but that wasn’t all. More and more characters were being introduced, making it hard to keep up with them all. While the cast for Season 1 was pretty large, I think it was still manageable. I never struggled to remember who was who and where they were and what they were doing. It was clear who were the main characters and who the supporting ones were. From Season 2 onward, people’s roles seemed to keep changing depending on the episodes.

The show also succumbed to the curse of ‘characters being killed off for drama’ thing that plagues some shows. Death gradually stopped being tense or surprising when main characters started being bumped off so easily. It felt like there was no real point to any of them – almost as if the actors just wanted to move on (just a guess).

The plot became increasingly convoluted too. I mean, the first season’s plot was complex but not to the point where the audience would lose track. From Season 2, it became almost incomprehensible, with multiple journeys through time making things even more confusing (one character was even left behind in a post apocalyptic future by accident and was never brought up again) and even character motivations turning on a dime. I don’t think the writers even knew what to do anymore with the first season’s main villain. One minute he was trying to gain his powers back, then he tried to reform, then he gave up and went back to villainy but then he reformed again… make up your damn mind!

As more characters and plot threads were introduced and dropped throughout the show, it stopped being entertaining. Episodes felt like a slog to get through; whatever happened, it lost the elements that made it appeal to so many in the first place. I clearly wasn’t the only one thinking this. Look at the U.S ratings for the whole show. You can clearly see a massive dip in viewership, which is why I suspect the show was cancelled. 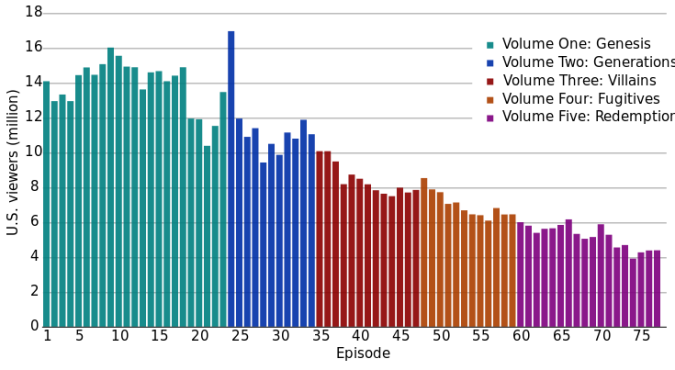 Which finally brings us to Heroes Reborn. At first, I assumed it was a reboot of the series; something that you could argue it desperately needed. In actuality, it’s a continuation, most likely set some time after the initial final episode. Following the events of a terrorist attack, the government put the blame on people with powers, forcing said people to go into hiding. The new mini-series will focus on the events surrounding a new cast of characters, each on their own journeys. Not only that, but some of the original cast will be reprising their characters, though it sounds like they’ll be in supportive roles instead of being the main focus.

From that very brief synopsis, it doesn’t sound all that bad. It’s in that perfect in-between where old fans can jump back in but new fans won’t be put off by all the backstory. Though I’m not too overly fond of the overall plot. Oh look, the government is being a bunch of dicks and forcing superpowered people into hiding. Hasn’t Marvel been doing this kind of storyline for years? Even Agents of Shield had elements of this.

My other problem is that it’s been five years since the show ended. I obviously can’t speak for everyone but I don’t feel any excitement for this, mostly because the show fell out of my favour midway through Season 2, but I was also 16 at the time. Since Heroes ended, I left secondary school, went to university and passed my course. A lot happened in those five years and I don’t think any of it was spent thinking about Heroes.

I guess the point I’m trying to make here is that I don’t dislike this return; I’m more apathetic to it. I don’t particularly care whether it succeeds or not, I don’t care what has happened or what will happen to what remains of the original cast, I don’t even care if it’s good or not. Unless the new series becomes the best thing to ever exist ever, I don’t think I’ll ever give it a watch. Not because I don’t want to but because any interest I had in its world, characters or plot faded away ages ago.

If you’re an old fan of the show who’s really hyped to see it come back or a newcomer that wants to give it a shot, be my guest. Don’t let my personal feelings discourage you. All I recommend is that you be wary, especially to those who watched Heroes for those initial four years. Hopefully they’ve learned their lessons, but keep your expectations in check or you’ll be just as disappointed as I was from Season 2’s first episode.