In case you don’t follow Kickstarter-related news or anything like that, you may not have heard of an upcoming crowd-funded videogame titled Yooka-Laylee. I’m normally not interested in these kinds of games myself (though I’m usually glad when such games do get funded, if only for the people that wanted them) but this one was an exception. Why? Well, many reasons.

For starters, it’s being made by Playtonic Games. Who are Playtonic Games? Well, they’re the people who made… oh wait, they haven’t technically made any games yet. “That doesn’t sound promising” you might say. True, but Playtonic aren’t a fresh new face on the block. The studio is comprised of several people who used to work for Rare, the company responsible for such recent classics as Kinect Sports… and… Kinect Sports Rivals.

Okay, real talk. Rare’s true gems were their titles from the 90s and early 2000s, before Microsoft bought them in 2002 (a decision many would say was the start of Rare’s fall from the limelight). They were responsible for the Donkey Kong Country trilogy on the SNES, Banjo-Kazooie and it’s sequel, Banjo-Tooie, Donkey Kong 64, and Conker’s Bad Fur Day. All of these titles are considered classics by most gamers of the 90s, so now you know why people are excited that those very developers are working on a new project.

So what is Yooka-Laylee? It’s an action-adventure platformer starring a chameleon called Yooka and a bat named Laylee, who the player take on a journey across a wide range of worlds, which can be unlocked and expanded by collecting Pagies, which in turn leads to new challenges to conquer and more collectibles.

Not hyped yet? You should be. The collectathon platformer genre has kind of died out over the last several years. The last game I remember even remotely resembling it was Super Mario Galaxy, and that was in 2007. It’s an acquired taste but I love the idea of having a huge overworld to explore and being rewarded for my curiosity with all manner of trinkets that result in me getting access to random goodies. There’s just something immensely satisfying about being able to go in seemingly any direction and still find what I’m looking for or being given a shiny object for completing a tricky task.

Admittedly, it’s hard to get overly excited when we don’t have a lot of gameplay footage yet, aside from some very good-looking beta footage that was shown in the pitch video on Kickstarter but, thanks to the generous donations of everybody who pledged towards the game, the developers will be able to put in what can only be described as a butt-ton of extra features and the like (fun fact: the developers needed £175,000 to finance the title. The target was met in 40 minutes and since then, the developers have gained over £1,500,000).

Yooka-Laylee will now contain various transformations with unique abilities (insert obvious Banjo-Kazooie comparison here), a boss battle on every level, some sort of Quiz Show challenge right before the final boss, mine cart sections that will no doubt ape the Donkey Kong Country games, and a fully fledged orchestral score. Speaking of, Playtonic managed to get beloved videogame composers Grant Kirkhope, David Wise and Steve Burke, who have all also contributed to previous Rare titles. You sensing a theme here yet?

The whole thing runs on nostalgia fuel; in fact, nostalgia was probably the main factor for the majority of those donations. In my opinion, this is both a good and bad thing. On one hand, I’m glad that the game heavily resembles those Rare titles I mentioned earlier, mostly because I never played them. Sadly, I never got to experience the likes of Banjo-Kazooie (I’m ashamed to admit the game scared me as a kid so I never got past the first world) so Yooka-Laylee is sort of my penance; a chance to experience the same joy that everyone else felt when exploring the likes of Spiral Mountain and Treasure Trove Cove.

On the other hand, though, I can’t help but feel that its attempts at emulating those games hurts its identity. I get that it’s a spiritual successor but almost every aspect of it thus far can be traced back to the old Rare games. The font used for the title, the googly eyes on said font, the two main characters being named after musical instruments, one of the main characters riding on the other’s back and being a creature with wings – apparently Laylee the bat will be rather sarcastic, exactly like Kazooie. I can’t help but worry that Yooka-Laylee won’t be known as Yooka-Laylee but as That Game That’s Exactly Like Banjo-Kazooie But Not.

Also, I can’t help but feel that the designs of both Yooka and Laylee are a little bit uninspired. They certainly look nice and there’s technically nothing wrong with them; it’s just they don’t really exude any kind of personality. Maybe if Yooka had an Indiana Jones-style hat or coat or something – when I look at him now, he looks like he could easily be a Sonic Boom character. At least Banjo had a backpack and shorts. 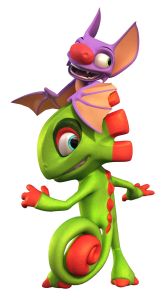 In the hands of any other company, I’d probably view it as retro-pandering; designed purely to lure in people with nostalgia goggles glued to their faces, resulting in a churned out product that has no identity, relying only on a perceived notion of what childhood felt like rather than actually being fun to play. But I’m choosing to be confidant in Playtonic. The game’s not due out until October 2016 so there’s plenty of time to help differentiate Yooka-Laylee from its older cousins. Plus, the positive reception it received from virtually everybody will hopefully make other developers realise that there is a demand for the collectathon platformer; people do want these kinds of games and, with any luck, we’ll see more of them. If it managed to pull that off, it could be just an average game for all I care because it would have revived one of my favourite genres.

2 thoughts on “Yooka-Laylee – My First Thoughts”