In a recent interview, Hideo Kojima, director of the ‘Metal Gear Solid’ series, admitted that he would love to see the star of the series, Solid Snake, appear in the next instalment of the ‘Super Smash Bros’ series for Wii U and 3DS, though he also said the chances of that happening were unlikely. Personally, I doubt Snake will get back in but the more I thought about it, I started asking myself maybe he should.

First, quick bit of history. At Nintendo’s E3 press conference of 2005, ‘Super Smash Bros Brawl’ was announced as one of the flagship titles for the Wii. Naturally, everyone freaked out. The ‘Smash Bros’ series, despite currently composing of only three games, is arguably one of Nintendo’s most successful. I mean, a fighting game featuring some of the most famous and not so famous Nintendo characters beating the crap out of each other? It’s a winning formula.

But what really took everyone by surprise was the reveal of Solid Snake as a playable character. “Hang on” we all thought, “Snake’s not a Nintendo character. What’s he doing here?” Well, that’s what I thought. Everybody else was, if you pardon my language, losing their collective shit. This was the first time a third-party character would appear in ‘Smash Bros’ and, ultimately, paved the way for the inclusion of Sonic the Hedgehog in the same game and Megaman’s appearance in the next one. It was a big deal but I wasn’t all that bothered.

I had never played a ‘Metal Gear’ game and didn’t even know anything about the series. I honestly thought it was out of place. From what I knew, the ‘Metal Gear’ series was very mature and serious, and it is. The games, specifically the ‘Metal Gear Solid’ ones, are emotional rollercoasters. They tackle themes of nuclear war, terrorism, patriotism, cloning, the Cold war, betrayal… it’s not a happy series. And while Nintendo has certainly had dark moments in its titles (particularly the likes of ‘Legend of Zelda’ and ‘Metroid’); they were still primarily known for being family friendly and safe for kids. So, why was Snake, a gun-toting, cigarette smoking, ex-soldier who has more blood on his hands than the local butcher, included? Well, the answer is that Kojima apparently begged the ‘Smash Bros’ director, Masahiro Sakurai, but was it really worth it?

Short answer: yes. I grew to love Snake’s inclusion because of how much he stood out. Seeing him trade blows with Mario, unload missiles into Kirby and get Pikachu into a stranglehold was simply hilarious. It appealed to that simple, child-like part to my brain and while I don’t play as him all that much, I appreciate his presence; it adds another level of silliness to an already silly series. 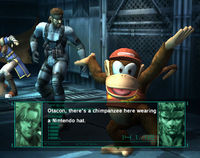 I think ‘Brawl’s overall aesthetic helped. Character models had great attention to detail, such as the denim on Mario’s overalls, and everyone was presented as seeming more ‘realistic.’ And I don’t mean something like Yoshi looking like an actual dinosaur. Colours were quite muted as well; it wasn’t Xbox game style brown and grey but colours didn’t ‘pop’ as much, with some exceptions like the Delfino Plaza stage. This resulted in Snake feeling like he belonged there, despite all the multi-coloured explosions and random mishmash of swordsmen, aliens and robots.

So, when the new ‘Smash’ game was announced at E3 2013, the first thing I noticed was the new art design. It was more vibrant; colours instantly grabbed you and it all felt like a cartoon; a very pretty cartoon, mind you. It keeps the level of detail that ‘Brawl’ had but it’s presented more like how the series is; over-the-top, goofy fun. And once I saw it, I thought “Snake would look so out of place.”

And that was it. I was certain Snake would not be back. He just wouldn’t fit in this new art style. I was a tad disappointed but I got over it very quickly. But once I heard how Kojima would love to see him come back, I found myself wanting it too. I mean, the game features plenty of human or human-like characters. Link, Zelda, Marth – why couldn’t Snake be updated to fit the art style? In fact, why does he? Keep him as he is and plonk him in there, anyway. It’d be hilarious.

The ‘Smash Bros’ series has always played on the idea of imagination; the intro to the first game featured dolls of the characters come to the life. It’s like when we were kids and played with our toys; I remember I had a Batman toy and the RC Car from ‘Toy Story.’ Did I keep them separate? No, I made Batman ride around on that car because it’s my imagination and I’ll do what I want. I didn’t care that they didn’t mix and it should be the same with ‘Smash Bros.’

Snake may have once been the outcast in my eyes, but over time I grew to love him and I wholeheartedly consider him part of this crazy family that spend their time blowing each other up. Though I still don’t think he’d make it into the next ‘Smash Bros,’ I’d be extremely happy if he does, if only to get a kick out of how out-of-place he still looks.

4 thoughts on “Should Snake Return for Smash Bros. 4?”