I don’t know exactly when the idea of Disney parodies started, but they have existed for a very long time. We’ve all seen them, and we’ve all probably made jokes about the atypical Disney film. So, what happens when the company itself decides to make one? Well, you get ‘Enchanted,’ a hybrid of live-action and animation released in 2007.

The film begins in the animated land of Andalasia, where peasant girl, Giselle (played by Amy Adams) meets Prince Edward (James Marsden), instantly falling in love and resulting in their immediate wedding. Edward’s step-mother, Narissa (Susan Sarandon), forced to fill in the Disney stereotype – I mean, worried that she’ll lose her position on the throne, disguises herself as the hag from ‘Snow White’ (I’m not kidding; they practically lifted the animation) and tricks Giselle into falling down a well that somehow transports her to modern-day New York.

She soon winds up being taken in by divorce lawyer, Robert (Patrick Dempsey), a cynic who doesn’t believe in the idea of happily-ever-afters or even fairytales, much to the chagrin of his daughter, Morgan. Yet he plans on proposing to his girlfriend, Nancy (Idina Menzel, who spends the whole film not singing). Meanwhile, Edward and Giselle’s chipmunk friend, Pip, arrive in New York to save her, along with Nathaniel (Timothy Spall), who is secretly working for Narissa.

The plot does a good job of parodying the usual Disney tropes, and takes delight in doing so; some of the jokes are a bit obvious but are still pretty funny . The first chunk of the film could easily pass for a classic Disney film, which takes blatant cues from the likes of ‘Sleeping Beauty’ (peasant girl surrounded by animals, falls in love with handsome prince etc.)

The film doesn’t really pick-up until Giselle enters New York, where she quickly finds herself completely out of her depth and struggles to get to grips with how the world works. Anyone familiar with the fish-out-of-water story should know what to expect from this. That’s kind of one of my problems with the film; it may be parodying Disney, but it’s still Disney, and a romantic comedy at that. As such, it gets very predictable very quickly and they were several moments towards the end where I couldn’t help but roll my eyes. I would maybe have appreciated it if it went full subversion.

That’s not to say there’s not fun to be had here. The jokes made at Disney’s expense are very funny, particularly as they’re coming from Disney themselves, showing that they possess some self-awareness. That opening I mentioned earlier? While it is played straight, it’s so straight you can’t help but chuckle at it. One of my favourite scenes is when Giselle realises how untidy Robert’s apartment is, and so calls upon the animals to help her clean up. Not only does this power that princesses seem to possess work in the real world, it leads to a bunch of rats, pigeons (one of which is missing a foot in a nice bit of dark humour), flies and even roaches coming together to clean the toilet and take the rubbish out. I didn’t know whether to be repulsed or amused (I settled on both). There are more moments like this but I shan’t spoil too many of them. 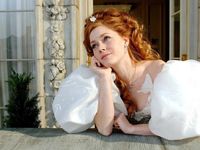 Amy Adams deserves special mention for her acting. She truly feels like a Disney princess come to life, with this constant wide-eyed naiveté and sweetness in her voice. It makes for a great contrast with Robert, who, as a divorce lawyer, has seen so many marriages end (including his own) that he has no hope for true love, which honestly makes one wonder why he’s going to propose to Nancy. He’s quick to call Giselle out but never out of cruelty; as far as he knows, she’s just some spacey lost girl. He functions very much like a human being would if they were caught in this situation. The only reason he doesn’t kick her out of the apartment straight away is because he can’t bring himself to do it (as well as for the sake of his daughter, who’s the only one who believes Giselle’s a bona-fide princess).

Still, Robert is probably the most likable character (from my point of view, at least) due to his sarcastic nature. I usually like to make snarky comments when I watch a movie and something predictable or stupid happens, but he beat me to the punch a lot of the time. His best scene is probably during one of the musical numbers where he spends the whole thing looking very confused.

The only other characters worth talking about are Prince Edward and Nathaniel, who share a dumb master/manipulative servant relationship. Edward is kind of hard to not like; though he has all the narcissism of Gaston from ‘Beauty and the Beast,’ he is a kind-hearted individual and it’s apparent that he genuinely loves Giselle (or he thinks he does at least). Nathaniel, meanwhile, is the butt of the joke for the majority of the film; he is very much whipped by Narissa and his plans to kill Giselle with poisoned apples are constantly foiled. He also goes through some interesting development of his own, similar to Giselle, only it led to a twist I wasn’t expecting.

I would comment on the music, being a Disney film and all, but I honestly can’t remember any of the tracks that well, which is a bit of a shame since Alan Menken, who did the scores for other Disney films like ‘Hercules’ and ‘The Hunchback of Notre Dame,’ composed the soundtrack, though I’ll give props for the scene with the song ‘That’s How You Know’ purely for production values.

Is ‘Enchanted’ a must see? No, it’s really not. I know it’s still a Disney movie but I would’ve preferred for something much different. That’s not to say the film isn’t enjoyable; it’s silly fun and, as a family film, it hits that sweet spot that makes it entertaining for little kids and adults. So, next time you come across it whilst browsing Netflix (like I did), stick it on and see what you make of it. It’s no classic, but you’re bound to crack a smile or three.