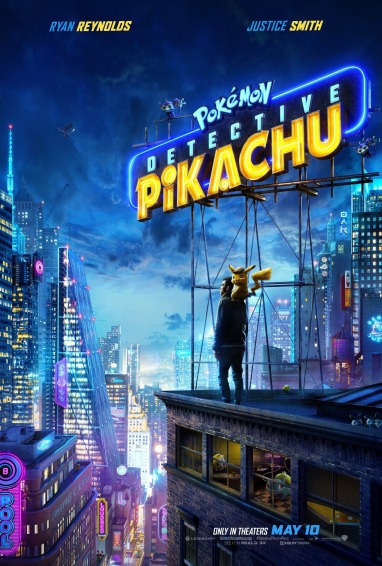 But then that very first trailer dropped and, suddenly, people started to say “Actually, this looks pretty good.” Early impressions indicated that Pokémon: Detective Pikachu would avoid every pitfall that other movies of its ilk had fallen into. Fans’ expectations went from nil to a hundred, but were we right to trust those trailers? Is it even a good adaptation of the game it’s based on? Is it something only the purest of Pokémon fans can enjoy? 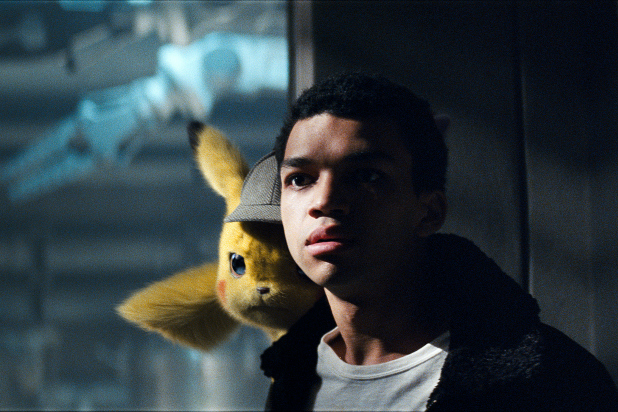 Based on the 3DS title of the same name (which I wrote a review of last year), the film centres around Tim Goodman (Justice Smith), a jaded insurance worker who learns that his police detective father, Harry, has died in a car accident. Tim heads to Ryme City – a place where people and Pokémon co-exist in harmony – to pick up his dad’s things, only to come across a hat-wearing, coffee-drinking, amnesiac Pikachu (Ryan Reynolds) who, for some reason, Tim can understand. Realising that this Pikachu was Harry’s partner, the two start to suspect that there’s more to Harry’s accident than meets the eye and that he might still be alive, prompting them to investigate his last case, which leads to them uncovering a conspiracy that could threaten the whole city.

Plot-wise, I will admit that it’s very basic and predictable. Even if you never played the original game, chances are you’ll be able to accurately guess a lot of the major plot-points. At the end of the day, though, it is a movie for children so a simplistic and easy-to-follow story is expected. That being said, the final third had plenty of cool surprises that I didn’t see coming, with one in particular actually answering a question that was left hanging in the game. Between this, the condensed story-line and better characterisation, I’d say this is an improvement over the original game.

Tim, in particular, is a perfect example. In the game, he was just a generic, nice kid with very little personality. Here, though, he is a lot older and cynical, and it’s made abundantly clear throughout the first half of the film how strained his relationship with his dad is. People react to his lack of a Pokémon partner with either confusion or sympathy. In a world where everybody has one, how exactly does someone who’s apathetic at best to them live their life? Given how Tim clearly had aspirations to be a Trainer as a kid, he’s an almost perfect representation of an adult fan who grew out of the series and lost interest. But, over the course of the film, he does grow attached to Pikachu and the two form a genuine partnership, maybe representing said adult fans who found themselves being drawn back and falling in love with the franchise again.

It’s helped by Justice Smith acting his damn ass off. Like, seriously, he did not need to try as hard as he did but his performance is stellar; his interactions with Pikachu being the highlight, of course. Kids will much prefer Reynolds as the electric mouse, though, who’s bursting with personality throughout but not to the point of obnoxiousness, even managing to be legitimately sincere at times. Reynolds may be playing a lot of himself but he uses it to enhance the role and help define Pikachu’s character, rather than just make him another Deadpool or something. Though there are occasional moments where he delivers lines solely to remind the audience of previous info and I wouldn’t be surprised if there were a few parts in the script that just read:

The rest of the cast all give good performances as well, even though their characters are a tad bare-bones. Ken Watanabe barely does anything as Lieutenant Yoshida and Kathryn Newton’s character, Lucy, while endearing due to how energetic her acting is and how hard she tries to be a serious reporter character, doesn’t have much of a personality or an arc. Everybody has a specific role to play and they play it well; it’s just that older viewers will be left wanting a bit more.

But this film’s biggest strong-point is its world-building. The game already set a pretty good basis for this, and even the anime had a few examples, but it’s still wondrous seeing this city stuffed to the brim with numerous Pokémon that all do something aside from battling. A Machamp acts as a crossing guard, an Octillery helps cut up sushi – even the little things had me grinning, like a lazy landlord just chilling in his office with his equally lazy Treecko or the random Slaking asleep in the news studio (don’t know who thought to bring that with them but it was funny).

What helps are the slight re-designs for all the Pokémon. Actually, I don’t think “re-design” is the best word to describe them because they look exactly like how they do in the games in terms of colour choice and sizes. They’ve just been given more detailed textures to help them fit into this realistic world and it works surprisingly well. Every Pokémon was instantly recognisable so, as a long-time fan of this series, I had to stop myself from pointing at them like a giddy child and whispering “That’s Braviary, that’s Doduo” and the like throughout the whole film.

This may sound silly but it’s a genuinely magical experience to see all these beloved creatures appear in a live-action setting so perfectly; they genuinely look like they belong in this world. They even manage to be downright scary at times when it’s needed, and I don’t mean in the “Mr. Mime looks creepy” way. I mean in a “Oh yeah, Charizard’s a giant fire-breathing dragon and if this thing went rabid, it could kill a person” way. I certainly will be unable to look at Aipom the same way ever again. 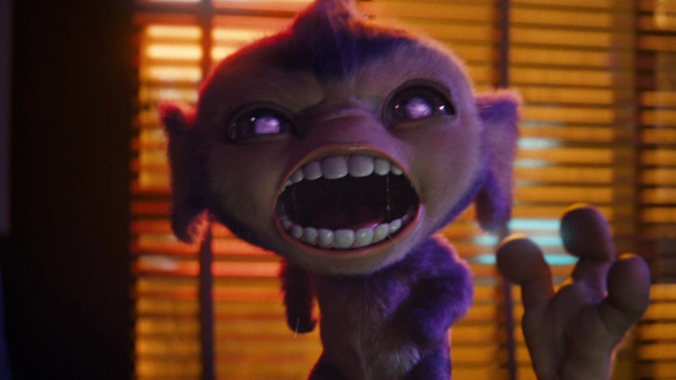 There’re also a bunch of nods to the franchise as a whole, despite its insistence of being it’s own thing separate from the games and anime. Tim’s bedroom is chock full of cool posters and he even has a giant folder filled with trading cards. There are two moments where the theme song from the anime plays which will elicit a smile from any fan. Considering how a lot of adaptations seem ashamed of their source material and do everything they can to distance themselves from it, Detective Pikachu knows and embraces what it is, making for a much more enjoyable movie.

On the downside, I very much feel like only Pokémon fans can wholly enjoy this movie. While it doesn’t necessarily alienate non-fans since the simple story doesn’t require much knowledge of the franchise and there are several points where dialogue helps fill in the gaps, how much one enjoys the adventure comes down to how much they enjoy Pokémon. If you’re not familiar with the series, you’d probably get bored very quickly, especially with the aforementioned simple plot and characters. 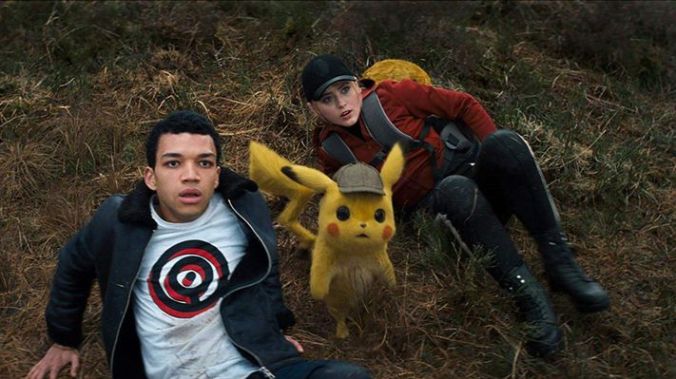 That said, I feel like the film does enough to try and keep parents who’ve been dragged to see it by their kids entertained with some of the gags. There’s a surprisingly mature vibe to this film at points, which makes sense given the obvious film-noire inspirations (I particularly love seeing the city at night, with its bright neon lights and moody atmosphere), not to mention a good number of adult jokes. I remember how so many parents were forced to watch the first animated Pokémon movie when that came out and absolutely hated it because of how intrinsically tied it was to the anime. Since Detective Pikachu doesn’t have that baggage and because of its aim to be a family film, it does a much better job in appealing to that older demographic. It also manages to have an adult edge without descending into that annoying “grim-dark” style that some people seem obsessed with.

But Detective Pikachu‘s greatest strength is its sincerity. While it’s not poe-faced or try-hard, it takes its story, world and characters seriously, and tries to tell a genuine tale of friendship and family, much like a lot of other Pokémon media. It may be lacking some elements of originality but everything about this film tells me that the people working on it believed in this project. This wasn’t an attempt to quickly cash in on the popularity of the franchise; it’s a legit Pokémon movie done in live-action. I know something shouldn’t be praised for what it doesn’t do but I am grateful to see this film actually be knowledgeable about its source material and play to its strengths, as opposed to certain other, similar films (coughSonicmoviecough).

Detective Pikachu may not be the first good videogame movie (that honour goes to Professor Layton and the Eternal Diva, thank you very much) but its mainstream presence and success will hopefully show that it can be done and how it should be done. Anyone who has even a passing interest in Pokémon should give this movie a watch. And while I know a lot of us our sick of movie franchises at this point, I honestly would not say no to more live-action Pokémon movies if they’re at least as lovingly made as this one.