WARNING: The following article contains spoilers for Pokémon 3: The Movie: Entei – Spell of the Unown 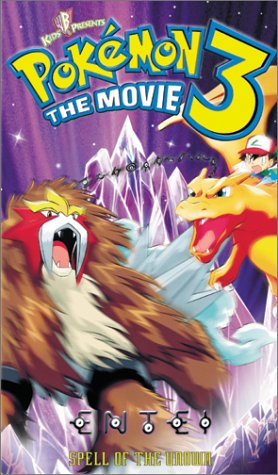 In case you never listened to my friend James and I’s commentary on the third Pokémon movie, well, you should (I actually find it to be one of our better commentaries). But if you really don’t want to or don’t have the time, I’ll just quickly state that it’s easily my favourite of the many Pokémon anime films that have been made. Granted, I’ve not seen all of them but I very much doubt any of the later ones can top this.

It’s my favourite for a number of reasons – the atmosphere, the music, the sympathetic and interesting antagonist, the voice performances, the overall story itself – but the absolutely best scene in the whole film (in my opinion, at least) is easily the battle between Charizard and Entei. And considering they heavily advertised this fight (it’s on the frigging poster and VHS/DVD cover), those who worked on this movie knew how much of a draw it was.

Admittedly, Charizard’s appearance is kind of BS (even with the one scene of him witnessing Ash’s mum’s kidnapping on a news report), with him swooping in at the very last moment to save Ash from falling to his death but who gives a shit? If you were following the anime at the time, then this was Charizard’s first appearance in a while and it was awesome, especially since he had grown past his disobedient phase and was now just as loyal to Ash as his other Pokémon.

But that’s only the start. After some other stuff happens involving all of Ash’s friends (including Team Rocket) showing up to help confront Entei and Molly, along with them displaying how they are a family and paralleling Molly’s situation by showing how they are a ‘true’ family and not one she fabricated herself (wow, this movie’s deep), Ash offers Molly the chance to leave the crystal fortress she’s sealed herself in and come into the real world and make friends with real Pokémon. But she refuses. All she wants is to stay in her dream world with her not-mum and not-dad (actually Ash’s mum and the fake Entei the Unown made – man, if you’ve not seen this movie, this just sounds insane). And with her demand for them to leave, Entei attacks and the fight begins.

Even at a most basic level, this fight is cool since Ash is also riding on Charizard’s back, further demonstrating the bond the two share, but it’s how the fight goes that makes it epic. For starters, Entei has already demonstrated himself to be ridiculously powerful, since he’s literally powered by Molly’s wishes. If she wants him to win, he WILL win. He was able to effortlessly take out some of Ash’s other Pokémon (including golden boy Pikachu, in a pretty awesome and intense fight), but Charizard makes him work this time.

Aside from Charizard already being pretty damn powerful in his own right, the two are forced to take the fight outside the tower they were in, which means Charizard gets an advantage on account of his flight. Entei is forced to try and stay atop the other surrounding pillars, otherwise he’ll fall into the spiky pit below. So what does Molly do? She wills (whether intentionally or not) some horizontal spikes out of the pillars to help Entei climb back up, turning the fight back in Entei’s favour.

The whole thing is just a spectacle, with the two exchanging massive blasts causing fantastic explosions and Ash trying to convince Entei that keeping Molly locked away isn’t the best thing for her. It’s a thrill from start to finish and it isn’t even that long, eventually ending with Entei managing to use the spikes to get in Charizard’s way and leaving him vulnerable to being attacked. I think the music is a big part of it; it matches the pace of the fight beautifully and accentuates every factor of it.

Sadly, Charizard ultimately loses the fight, crashing back into the tower and left at Entei’s mercy. And while I’m still a little annoyed he lost, the fact that he was able to hold his own for that long against a Pokémon that couldn’t lose is a testament to Charizard’s power alone. Plus, if he had won, we wouldn’t have got the moment of Molly finally realising that things had gone too far and begging Entei to stop (coz he was totally gonna murder Charizard with a point-blank fireball to the face, like holy shit).

Writing about this scene simply doesn’t do it justice. It’s the kind of fight that works not just because it’s a spectacle to watch but how emotionally charged it is. And it’s in a freaking Pokémon movie! I would recommend watching the fight on it’s own but, really, watch the whole movie; it’ll be even more awesome, I assure you.