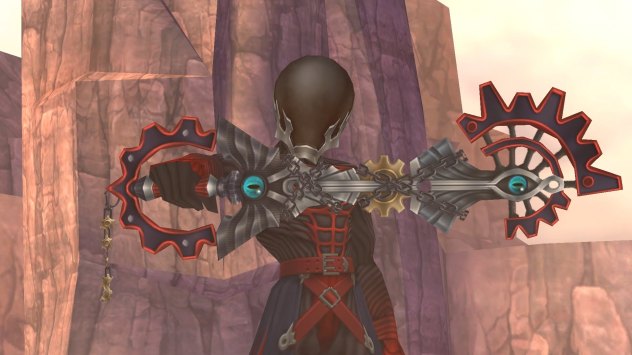 Following on from last week’s VG Music Pick, I want to write about the scene where that music piece debuts – Ventus’ first fight with Vanitas. The music on it’s own is really good, but it takes on a whole new level of awesome when it’s combined with this scene.

Ven has been led to an unknown wasteland, where he confronts Vanitas about his strange claims earlier, only for Vanitas to pretty much give him no real answer and just pulls his Keyblade on him. Vanitas having a Keyblade isn’t much of a surprise for the audience but it does momentarily surprise Ven, and for good reason. As far as Ven knows, the Keyblade is supposed to be used for the purposes of good and protecting the light so how does this obviously evil asshole have one?

It doesn’t phase him for long though, as Ven quickly regains his composure and instantly draws his Keyblade (which is pretty bad-ass considering the kid’s only 14 or something). It’s bizarrely refreshing to have a cutscene segue into a boss fight so quickly. The two don’t bother verbally challenging each other and skip straight to business. 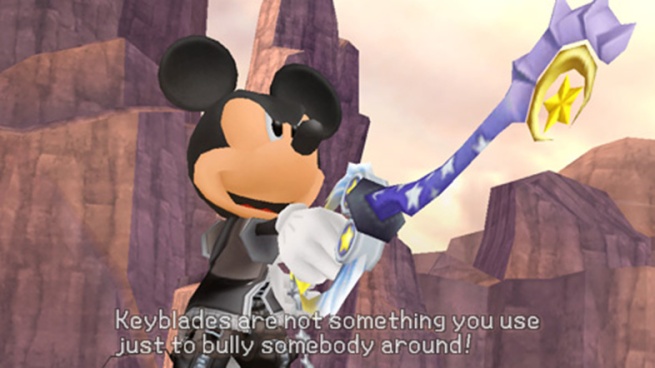 Unfortunately, no matter how well you do in the fight, Vanitas kicks Ven’s ass anyway and decides to just kill him then and there. He charges up his attack and launches a fireball at Ven’s helpless body, seemingly destroying him. But SOMEHOW Mickey Mouse happened to save him and pull him to safety. I hope you’re familiar with Kingdom Hearts otherwise that last sentence made no sense.

Funnily enough, this is actually my favourite part of the scene. Mickey always had a habit of showing up in the nick of time in previous games (hell, that was even a mechanic in Kingdom Hearts II) and there’s something thrilling about having the face of Disney itself appear to save the day. And Mickey, after healing Ven, doesn’t hesitate to immediately stand up to Vanitas, calling him out for his improper use of the Keyblade and fights him, with a recovered Ven by his side. I love any moment in this series when Mickey gets to be a bad-ass and the ensuing fight becomes a lot more fun with him backing you up.

Though one detail I especially enjoy is how Vanitas doesn’t even react to Mickey’s presence. I feel like this could be interpreted in two different ways. Either Vanitas simply doesn’t care that another Keyblade wielder showed up and just intends to destroy him as well for interfering OR he’s stunned silent because a short, talking cartoon mouse showed up and threatened him and he doesn’t know how to respond to this. It’s probably the former but the latter’s much funnier.

Regardless, this boss fight is easily one of the highlights of the entire game thanks to the presentation, the music and the actual fight, of course. Writing about it makes me want to play it again.