When Disney announced they would be making a TV series based off of Tangled, I was admittedly skeptical but still curious. Everything seemed perfectly wrapped up by the end of the movie; there was even a short all about Rapunzel and Flynn’s (sorry, Eugene’s) wedding. It didn’t really seem like there was anything left to do with the story or characters; the cynic in me wanted to assume that this was just Disney trying to make some easy money.

But, let’s not forget, Disney have done the same thing before in the past. Fellow 90s kids no doubt remember catching at least one episode of the likes of Hercules, Aladdin or The Little Mermaid, and all of them are considered to be of decent quality. So, out of fairness, I decided to give the pilot movie, Tangled: Before Ever After, a shot and see if it does a good job setting up the show. Is it as glorious as gold or is it as messy as Rapunzel’s bed head? Well, read on and find out.

Set six months after the events of the film, Rapunzel (voiced again by Mandy Moore) is still adjusting to the princess life, despite successfully reconnecting with her parents, King Frederic and Queen Arianna (Clancy Brown and Julie Bowen respectively). On the eve of her official coronation, the stress of it all gets to her and results in her sneaking out for the night with her new best friend and handmaiden Cassandra (Eden Espinosa).

The pair soon come across some mysterious and unbreakable rock spires that, upon touching them, cause Rapunzel’s hair to grow back to how it was in the movie. Oh, and it can’t be cut off either. And as if things couldn’t get worse, a mysterious villain called Lady Caine (Laura Benanti) is plotting a revenge scheme against both Rapunzel and her father.

Let me start this off by talking about the animation. As you can probably guess from the images, the show is being done with traditional 2D animation as opposed to the original film, which was CGI. If you find yourself being a little put off by it, I honestly don’t blame you. I was very unsure as to how it would look in motion and while I’m sure there are some people that just won’t like it, I actually think its pretty decent. It’s certainly unique and helps it stand out against some of Disney’s other cartoons. Plus, the world and characters are still recognisable; it’s an almost natural shift. It’s one of those animation styles that looks much better in motion than in still images.

Fortunately, even if you’re not too big on the animation, the writing is pretty on point. The opening is admittedly a bit of a slog; nothing awful but it’s not particularly exhilarating or interesting (ironic since it opens up on a horse race) but the plot does pick up considerably just ahead of the half-way mark.

Both Rapunzel and Flynn (sorry, Eugene – also being reprised by Zachary Levi) are perfectly on-point. Despite it being seven years since Tangled came out, Moore and Levi have managed to slip back into their roles very well and I’m honestly thrilled that they both returned. Levi is especially good and easily provided the most laughs throughout the whole thing. I remember being surprised with how funny Tangled got and the same thing happened here. There’s a nice balance of slapstick and spoken humour (there’s only one hair-related pun which shows some impressive restraint on the writers’ part).

Rapunzel’s parents also have developed personalities now and, while they’re a bit obvious (overprotective dad and understanding mum), they work fine, though King Frederic gets a lot more screen-time than his wife, with his relationship with Rapunzel being one of the focuses, and it’s actually pretty compelling. 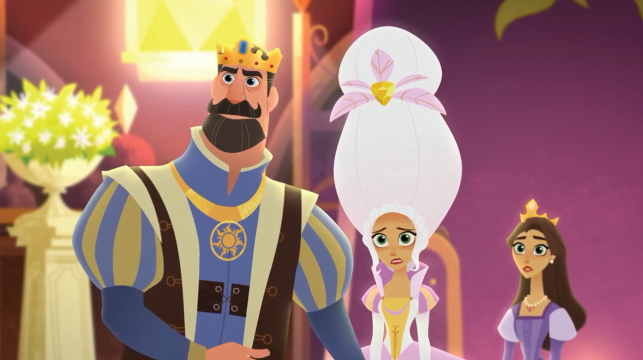 See, Rapunzel wants to enjoy a life outside of the castle but Frederic is so focused on preparing her to be queen one day, she isn’t really allowed to live her own life. There’s a scene where she visits the town and tries to interact with the villagers but her entourage of bodyguards won’t let her. Ironically, she’s found herself in a similar position to when she was being raised by Mother Gothel; she feels trapped.

While it’d be easy to just label her as being entitled (since her current position is still a million times better than it was before), Rapunzel doesn’t come across as unlikable or selfish as a result. I think a lot of us can relate a little bit to her position; she is eighteen still. It’s natural to want more independence. And it’s not like she’s actively trying to shirk her duties; she seems to embrace it a little bit, even if her methods are a bit unorthodox (apparently bear-hugging foreign dignitaries is a big no-no).

At the same time, however, her father isn’t presented as your typical “dad who doesn’t understand his child and is too overbearing and he’s wrong!” kind of character. OK, yes, he is rather overprotective but, as this pilot reminds us, he has every reason too. He’s still traumatised from Rapunzel’s kidnapping all those years ago. And while he may finally be reunited with her, there is still a slight disconnect because of their eighteen years-long separation. He’s gone from having no child to a teenager on the cusp of adulthood. There are naturally going to be a lot of bumps and hurdles to get over.

And while we’re still talking about characters, Cassandra is a nice addition to the overall cast, serving as the typical best friend character who’s just super supportive of Rapunzel and is constantly butting heads with Flynn (sorry, Eugene). She also acts as a sort of bodyguard, skilled with all manner of weaponry, meaning she’s perfect for action scenes (though Rapunzel isn’t exactly defenseless). The one problem with Cassandra, though, is that she just shows up with very little introduction, so we don’t see how her and Rapunzel got to this level of familiarity. But, hey, maybe this’ll be explored in the show in like a flashback or something.

Possibly the most interesting thing about the pilot, however, is the return of Rapunzel’s hair. We already knew it was going to come back thanks to promotional art for the show but, considering the writers had to essentially pull a little bit of a retcon, they handled it in probably the best way they could have done it.

Not only is there a reason for her hair growing back, but it looks like the event itself will serve as the driving force for the series. They’ve actually created a mystery around it and there are still questions to be answered regarding the mysterious rocks that made Rapunzel go blonde again. Between this and the post-credits scene, I can’t help but be curious and want to see where exactly this is going.

Unfortunately, much like how the opening is kind of middling, the climax towards the end is a bit… dry, to say the least, and that’s primarily because of the villain, Lady Caine. The pilot tries its damnedest to hype her up (and it works) but when she springs her trap and reveals her motives, I couldn’t help but go “Is that it?” Between her incredibly weak motive, her not well thought out plan and how easily she’s defeated, she feels like she existed just so we had a villain. Maybe she’ll crop up again in the show and get a bit more development but I won’t exactly be restless if she never comes back.

In the end, though, does Tangled: Before Ever After set up a good precedent for the series? Short answer – yes. Despite its flaws, it’s still an entertaining and faithful follow-up to the movie that has some interesting ideas and set-ups. If you’re worried about it undoing all the goodwill the original movie made, don’t be. The characters are all on fine form, Rapunzel and Flynn’s (sorry, Eugene’s) romance is still as strong as ever, it’s got some nice tunes (I’m particularly a fan of the “Wind in My Hair” musical number); it was just an overall enjoyable watch.

Tangled instantly became one of my favourite Disney movies when I saw it and if the series is of at least the same quality as this pilot, I have no issues with seeing more of Rapunzel and co. and whatever adventures they may have in store.