If you were told that Disney’s Aladdin was getting a “dark, mature” remake, you’d probably burn me alive for even mentioning it, followed by looking for more details online just so you can become even more incomprehensibly angry over the fact that it exists. And rightly so. These “mature” remakes usually come out as cynical messes that have clearly been created by people with no understanding of the original source material and just wanted to make some easy cash.

Which is why, for now, I want you to refrain from tracking me down with pitchforks and torches when I say that this particular “dark, mature” remake is actually quite good. How good? Well, I read all 380 pages of it in a single night so that’s got to say something, right?

Written by one Liz Braswell, A Whole New World is actually the first in a series of books that are essentially “what if” scenarios of classic Disney films (and if you’re wondering, yes, they are officially licensed by Disney themselves). This one takes the story of Aladdin and changes one simple aspect of it – what if Jafar successfully took the magic lamp from Aladdin after he escaped from the Cave of Wonders?

What follows is a much grimmer depiction of the story; one where Jafar, with the Genie by his side, quickly takes control of Agrabah, and it falls to Aladdin and Jasmine to form a resistance and take back their kingdom. All the while, Jafar grows more and more powerful and seeks to break the very boundaries of magic itself.

This is essentially a fan-fiction, and while published fan-fics aren’t so strange nowadays, this is probably one of the few instances where not only is it quite obviously a fan-fic, it’s a pretty damn good one at that. How?

Well, for starters, all the characters are pretty much accurate to how they were in the original film. One problem I always had with some fan-fics is that characters would sometimes be woefully out of character. The sarcastic best friend would become an abusive asshole, the psychopathic super-villain would instantly redeem themself for an attractive woman – the characters were completely re-written in order to serve the story. This story doesn’t do that. 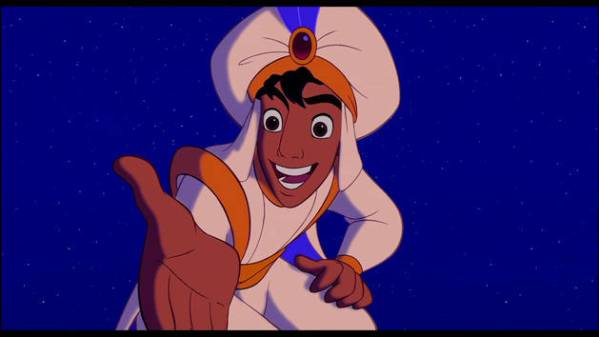 Despite being a mature re-telling aimed squarely for adults (because trust me, you don’t want your five year old reading this), Aladdin isn’t changed into a brooding anti-hero or anything. He’s still the endearing young man we know from the film; still worthy of being considered the “diamond in the rough.” The same applies to Jasmine, Jafar; even the Genie still has his mad-cap energy and Robin Williams-esque improv, which you think would be tricky to pull off in this format.

That’s not to say the characters don’t have some slight differences, but they are a result of the plot completely changing and the more mature writing. While Jafar was an evil bastard in the film, his early acquisition of the lamp allows him to get away with so many more heinous acts – it was borderline horrific to read.

This in turn causes Jasmine, who finds herself forced to flee her own home, to become a lot more ruthless as well. She was always a pretty strong character before and she’s still a perfectly pleasant individual here (she’s outraged over how poor some citizens were under her father’s rule) but, once she starts leading her rebellion, she gradually becomes consumed by a desire for revenge against Jafar, with Aladdin trying to rein her in. It’s not a complete reversal of her character; it’s taking it in a slightly different direction while still keeping her original characterisation in tact.

The new tone doesn’t hurt the source material; even when events are so drastically altered, it’s actually interesting (if shocking) to read, especially with more comedic characters like the Sultan and the Carpet. Seeing these familiar characters in much more dire circumstances means it’s easy for the reader to become invested. It’s grittier, yes, but not in a painful way; it’s fundamentally clear that Braswell actually understands the movie and its characters.

This is made abundantly clear from the second chapter onwards; the scenes of Aladdin stealing bread and escaping the guards, his first encounter with Jasmine – they’re practically one-to-one with how they’re done in the film. Hell, I’m pretty sure most of the dialogue was directly lifted from the film.

Speaking of, the world and characters of the original Aladdin are expanded upon in much greater detail. We see how Agrabah is affected because of the Sultan’s lackadaisical rule, both Jafar and the Genie are given more backstory; we even see Aladdin’s mum – a character who was completely absent from the film – and how she affects Aladdin. While she doesn’t appear after the first chapter, her impact is still felt throughout.

There’re also a handful of completely original characters that help fill out the cast. While they do stand-out somewhat, their inclusion never felt forced. At no point does it ever feel like they’re distracting or taking the focus away from either Aladdin or Jasmine. In fact, only two of them, Morgiana and Duban (old friends of Aladdin), can be considered as part of the main cast and are both likable and manage to feel like they actually belong there, as well as give Aladdin somebody else to talk to besides Abu.

While maybe not for everybody, A Whole New World is still a fascinating read. Every chapter had me gripped; with every turn of the page, I was dying to see what happened next. Once Jafar gets hold of the lamp, you have no clue what’s going to happen next. While it may be much more adult, it never feels like it’s stepping on Aladdin’s legacy nor does it try and present itself as superior just because it dares to be darker. And even then, that constant glowing beacon of hope and magic that Disney is so well known for creating still shines through somehow.

If you are so much as tempted to know how this story turns out, then I implore you to actually track down a copy and give it a read. As for me, I can’t wait to read more of these alternate takes on Disney films; they at least have more imagination than the live-action remakes.