A few months ago, I wrote an article about my experience with the Digimon franchise, which was a result of me gaining an interest in the upcoming movie series Digimon Adventure tri. That series has since started with its first entry, Reunion (which was also distributed as four episodes) and, honestly, I’m hooked due to its combination of great animation, mature storytelling and sheer nostalgia.

As such, I am very excited for the rest of the series and I naturally have several things I hope to see and questions I want answered. So, here’s a quick wishlist of sorts of all the things I want to see in the future.

1. More focus on other Digimon 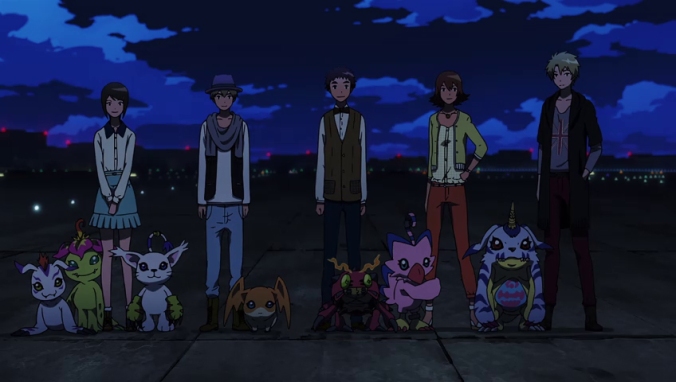 What I mean by this is that I hope that the main Digimon that aren’t Agumon or Gabumon get their own moments in the spotlight. I’ve always felt that Agumon and Gabumon received a lot more focus than the rest, which is probably a result of them being the partners of Tai and Matt – arguably the two main characters.

In Reunion, the majority of the focus was squarely on Tai, and because of their somewhat vitriolic relationship, Matt got dragged along with him. I’m not complaining, mind you. There was nothing wrong with it. I just hope that any future battles don’t consist of all the main Digimon getting their asses handed to them and then having Omegamon pop up again and again to save the day. Let somebody else be awesome for once, please?

This is something that particularly resonates with me because I always wanted to see the other Digimon reach their Mega forms. It bothered me a bit that it never happened during the original series. In one of the movies, both Patamon and Gatomon did just that but they were instantly defeated by the main villain. It really left a sour taste.

Fortunately, it looks like I may just get my wish as a low quality image of a poster for the second movie seems to depict the Mega forms of Palmon and Gomamon. Hopefully, the rest will follow suit.

When you’ve got a main cast as large as Digimon does, I feel it’s important that every one of them contributes and gets their own time to shine; a chance to show how bad-ass they can be. After all, they each have their own fans. If they’re not going to do anything aside from be punching bags for the bad guys and make the leads look even stronger by comparison, they may as well not be there.

As I briefly said earlier, the majority of Reunion was spent on Tai and his emotional conflict concerning the new Digimon threat. After witnessing the amount of destruction caused by the invading Kuwagamon and the battle at the airport, Tai finds himself doubting their own actions and if it’s right for them to fight or not.

In a way, this is a decent bit of characterisation for Tai. In the original series, he was the headstrong one; the first one to charge into battle and take a stand – his crest was the Crest of Courage. Also, since the majority of the series took place in the Digital World, there was never a risk of innocent people getting hurt in the crossfire. Even when the fights were taken to the real world, any damage to the city was never really addressed. It was a kid’s show, after all, and as a kid, these are things you don’t think about. You just want to see your giant monster beat up another giant monster.

So, having tri. actually address the ramifications of these battles is actually pretty interesting, since Tai (and the audience) have grown up and how fully understand the consequences. While nobody is killed during the ensuing battles, Tai finds himself scared that they may end up doing that if they continue to fight.

My problem with it, however, is that Tai dwells on this for so damn long and constantly has the same flashbacks to the destruction the Digimon caused – all the way up to the battle with Alphamon. It’s not the fact that he has this doubts I have issues with; it’s that he allows it to fester.

And as Matt rightfully points out to him, if they don’t fight the invaders, people WILL get killed. I don’t blame Tai for having these fears but choosing to not fight won’t make the situation any better – if anything, things will turn out worse.

I guess you could call this more of a personal complaint since I can’t stand the type of characters who refuse to fight because they think it’s the better option, despite the fact that they’re enemies are causing wanton destruction and endangering lives. The baddies aren’t going to stop just because you won’t fight so get off your arse and take a stand!

Hopefully, Tai will have got over his doubts following Alphamon’s appearance. I don’t want the entire series spent on him sitting forlornly, asking questions that have an obvious answer.

3. Sora gets a better character arc

While the majority of focus was on Tai, Reunion did briefly show us what the rest of the Digidestined were up to. Some of it was interesting, like Joe who’s struggling to get good grades and is shirking his friends to focus on improving. Some of it was cute like Izzy realising he’s actually attracted to Mimi and trying to come to terms with it (seriously, that shit is adorable). And then there’s Sora, whose entire arc seems to revolve around picking a boyfriend….. Ugh.

First off, love triangles have become one of the worst writing conventions to ever exist. I find them just as bad as ‘it was all a dream’ endings. I won’t rant forever about them but the mere idea of them just makes me cringe. However, I can at least say this ‘arc’ certainly didn’t feel as obtrusive as some other examples I won’t mention (coughLegendofKorracough).

Second, I can’t help but feel this is a little insulting to Sora’s character. The idea of her being attracted to a guy isn’t the issue; it’s that this seems to be being set up as her pivotal arc i.e. the most important thing happening in her life right now. My memories of the original series are hazy at best but I’m pretty sure Sora did a lot more shit than worry about boyfriends.

Thirdly, I can’t help but find the whole thing kind of cynical. For those not in the know, the epilogue to Adventure 02 (the second Digimon series) showed that Sora married Matt in the future. This did not sit well with people that felt that Sora should’ve ended up with Tai, resulting in a split in the fandom so wide you could probably fit a thousand Greymons in the space between them. 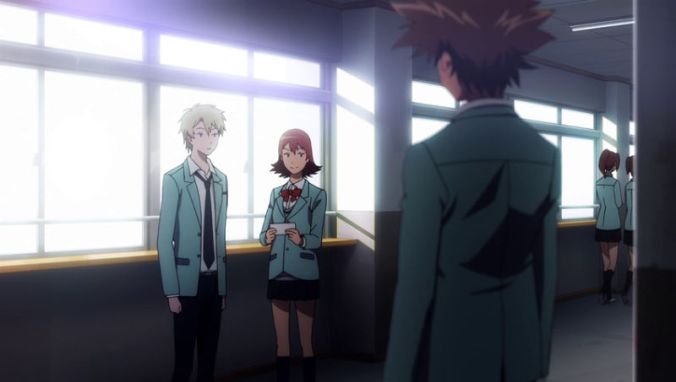 By having Sora feel unsure of who she wants to be with – Tai or Matt – it feels like the writers are trying to make up for what they now view as a ‘mistake’ but I think no matter the end result of this arc, a lot of people are still going to be pissed. If they retcon the epilogue and have Sora get with Tai, the MattXSora fans are going to feel betrayed. If they don’t and Sora gets with Matt, the TaiXSora fans are going to feel like they’ve been strung along; tricked into thinking their pairing could finally happen. And if Sora winds up with neither of them or if it’s left ambiguous, it might end up feeling like a massive waste of time.

Some might say it’s hypocritical of me to complain about this considering I only just admitted to liking the whole IzzyXMimi thing but that’s not all there is to Izzy and Mimi’s characters at the moment. Some emphasis was put on other parts of their life (such as Izzy spending time with his parents for their anniversary). With Sora, it feels like this is all there is to her life at the moment; we know nothing about what else she’s doing right now or if she has any other plans for the future. It’s all about the boys and I pray that we get to see other facets of her life in the later movies.

Arguably the most important thing about a beginning is that it needs to grab the audience; it needs to draw them in and want to invest time into the story. Adventure tri. does that in spades. I didn’t fully know what to expect when I started watching it, but I certainly didn’t think I’d see the cast of Adventure 02 SEEMINGLY MURDERED! Four young children DEAD!

Okay, it’s a lot more ambiguous than that but what a way to start a series. Silhouettes of Davis and co. falling alongside their Digivices against a blood red background, with their partner Digimon nowhere to be seen. I was immediately gripped but it did come with a slight downside. Throughout all four episodes, I was constantly asking “What happened to them?” And nobody was answering. Hell, nobody was listening.

Nobody mentions the 02 cast. No one asks where they are. Nobody points out that they haven’t seen them recently. You’d think, at the very least, T.K and Kari would’ve noticed their absence considering they hung out with them during Adventure 02. But no, it’s never addressed and that really bothered me.

Now, the obvious answer is that they’re saving that mystery for later, which is probably true. I mean, they can’t NOT address this. Admittedly, though, I have some worries.

I know it’s probably unlikely that the cast have been killed off (it’s more likely they’ve been captured) but I have this horrible feeling that, considering how a lot of people didn’t like Adventure 02, this is the creators way of ‘apologising’ for it – by just removing the characters involved and pretending it never happened. My issues with this are two-fold.

1. That’s not fixing or addressing the problem. That’s just sweeping it under the rug. It’s the equivalent of having the ‘check your engine’ light flashing and just putting some tape over the light.

2. You know there are probably people that did like 02, right? Much like how a lot of people grew up with the original series, they are those that grew up with 02, and became attached to those characters and their stories. If you just act like that series never happened, it’s really insulting to those fans as you’re essentially telling them that the show they devoted themselves to didn’t matter.

Again, though, this is highly unlikely, especially since that aforementioned poster for the second movie shows off Imperialdramon, one of the 02 Digivolutions. So with any luck, we’ll be getting an explanation as to where they are next time.

When is the next movie out? … March?! Motherf-