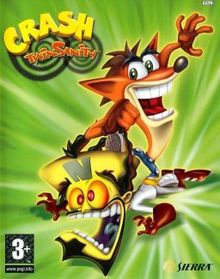 Despite being something of a rush-job, resulting in a lot of cut content and glitches aplenty, Crash Twinsanity managed to still receive some positive reception from critics and fans alike. And I think one of the main reasons for that was that it took the concept of archenemies Crash Bandicoot and Dr. Cortex working together and ran with it as best as it could, resulting in some genuinely hilarious antics. One standout for me (and no doubt others) in particular are the Humiliskate levels; the first one specifically.

For context, the level begins with Cortex saying they need to reach N. Gin’s battleship before it leaves and desperately trying to come up with a way to get there in time. As he says this, he’s leaning over a guardrail and Crash is (for lack of a better word) enticed by the doctor’s swaying butt, prompting him to sneak up behind Cortex and just kick him over the rail and use Cortex as a snowboard.

First of all, the build-ups pretty great, with Crash looking almost hypnotised as he watches Cortex’s behind. At one point, his expression changes into what could be interpreted as either a thoughtful look (like he genuinely came up with an idea to help) or just him trying to resist the urge to kick Cortex in the arse. No matter how you look at it, though, it’s still funny.

And so is the sight itself. How many games have snowboarding levels where you use another living being as the board? Cortex has already been subjected to several humiliations by this point in the game and this is arguably the crowner, forced to slide down an icy mountain, smashing into wooden crates headfirst (or butt-first) and even grind on rails by the crotch. The look on his face, combined with the sound effects, is priceless.

There’re even a couple of set-pieces to keep the player engaged slightly and not wear the gag out too quickly. First, the duo crashing into a giant chicken coop and, later, the Moulin Cortex (no prizes for guessing what this is meant to be). I don’t know why it’s there or why Crash’s ex, Tawna, is on the sign but the sounds that follow get a chuckle out of me regardless. I’m not even gonna say what happens; just look it up yourself, and enjoy some delightfully cartoony slapstick.