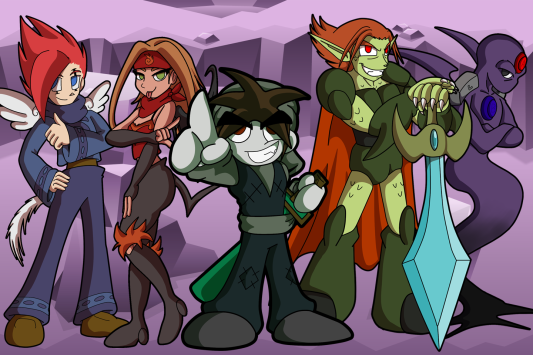 I’m honestly really glad I gave TOME a chance when it came out. I normally wouldn’t have invested time in an independently made, online only cartoon series unless I heard good things about it later, but I decided to give it a shot from the get-go since I was familiar with some of the people working on it.

Though I have occasional nitpicks with it, it was, overall, a very well made show with good action, writing and characters and the creator, Christopher Niosi, has my undying respect for managing to pull of his pet project successfully. And since it was recently the show’s fifth anniversary, I figured I should contribute to the celebrations by writing about one of my favourite moments from the show – the introduction of the character Zetto.

First, a quick bit of context: TOME is set in an online, super advanced videogame world used by millions of players worldwide. Our main hero, Alpha, is infected by some sort of virus in the first episode that makes him more powerful and gives him a boost in confidence, but it allows him to actually bypass the rules of the game and physically hurt people in real life. In Episode 5, events cause Alpha to become incredibly stressed, leading to the virus completely taking over his body, transforming him into an inhuman monster.

He goes on a rampage and seems pretty unstoppable. Enter Zetto, a completely new character who comes out of nowhere. Though you don’t know what his deal is, his design, toothy grin and overall confidence immediately shows that, whoever he is, he’s probably tough.

Cue him instantly crossing paths with Demon Alpha and proceeding to waste him. We just spent a good several minutes witnessing Demon Alpha taking other players out instantly and, suddenly, this random asshole manages to actually beat him, and with almost no effort at that. He didn’t get hit once, and even the virus can’t comprehend how it lost (the virus is sentient, BTW).

I think what I love about this scene is how it sort of subverts the usual trend of “hero vs rival” fights (though the actual fight and accompanying music are awesome too). Zetto doesn’t come across as particularly likable and is a pretty smug bastard (he even KOs two random players before fighting Alpha seemingly just for shits and giggles) but, at this point, we kind of want him to win since Alpha isn’t himself. He’s, at this point, the only one that could potentially snap him out of it.

That’s the only reason you end up rooting for him, which is weird since, after Alpha returns to normal after his beat-down, Zetto essentially just shit-talks him and tells him that they’ll have their rematch at the upcoming tournament, almost demanding that Alpha get better. While Alpha is brought back to normal, the victory is almost hollow. He wasn’t saved by the power of friendship or something; some random douche-bag just showed up and beat his ass into the ground.

That being said, it did instantly create an interest in Zetto. His identity and motivations were a complete mystery for the longest time and we only had his few lines of dialogue to work with (his first line, “Well, it’s about time,” was enough to have me going “Who ARE you?!”). Upon further examination, they actually did hold quite a few hints, and after later episodes revealed who he was, the scene takes on a whole new light but I’ve rambled enough and I wanted to explain why this scene works on the first viewing.

While Zetto never became one of my favourite characters, his first appearance was done extremely well and helped mark one of the series’ biggest turning points.