With Rocksteady choosing to bow out and end the Arkham series, we find ourselves asking the obvious question: what comes next? As long as Batman remains popular, there will always be videogame tie-ins and considering how much money Warner Bros has made from the Arkham games, it’s unlikely they’re just going to let the series end.

Whether or not the games will continue in the same universe, play like the Arkham games or carve their own identity remains to be seen, but we all probably have some ideas we’d love to see become proper games, so to conclude this month of Batman, here’s a short list of my personal ideas for future Batman games.

Anyone who watched Batman Beyond has most likely dreamed of a fully-fledged videogame adaptation. The series did have one videogame to its name (based off of the Return of the Joker film) but it was apparently shit. Since then the series has merely been referenced to, with the series’ Batsuit being DLC for both Arkham City and Arkham Knight and some of the characters being DLC for Lego Batman 3.

So how great would it be for Terry McGinnis to take a starring role, allowing players to take control of a younger, leaner Batman with even more advanced technology, and the ability to actually fly throughout a futuristic Gotham and battle brand new villains like the Royal Flush Gang, Inque, Shriek and Blight, with maybe a few of Batman’s old enemies making returns as well? Sounds pretty awesome to me.

You could even have it set in the same universe as the Arkham games. Maybe Terry stumbles across the Batcave and decides to take up the mantle himself? Or maybe Bruce isn’t dead and has been in hiding all these years, and a chance encounter with Terry leads to him tutoring him into becoming a new Batman?

It’d be pretty interesting/entertaining to see an elderly Bruce Wayne filling in as mission control this time around. The dynamic between him and Terry was arguably one of the best things about the show; what with Terry being a smart-mouthed teenager and Bruce being a hard-ass loner. Plus, we could have Ace the Bat-Hound as an assist or something. The world needs more videogames with playable dogs. 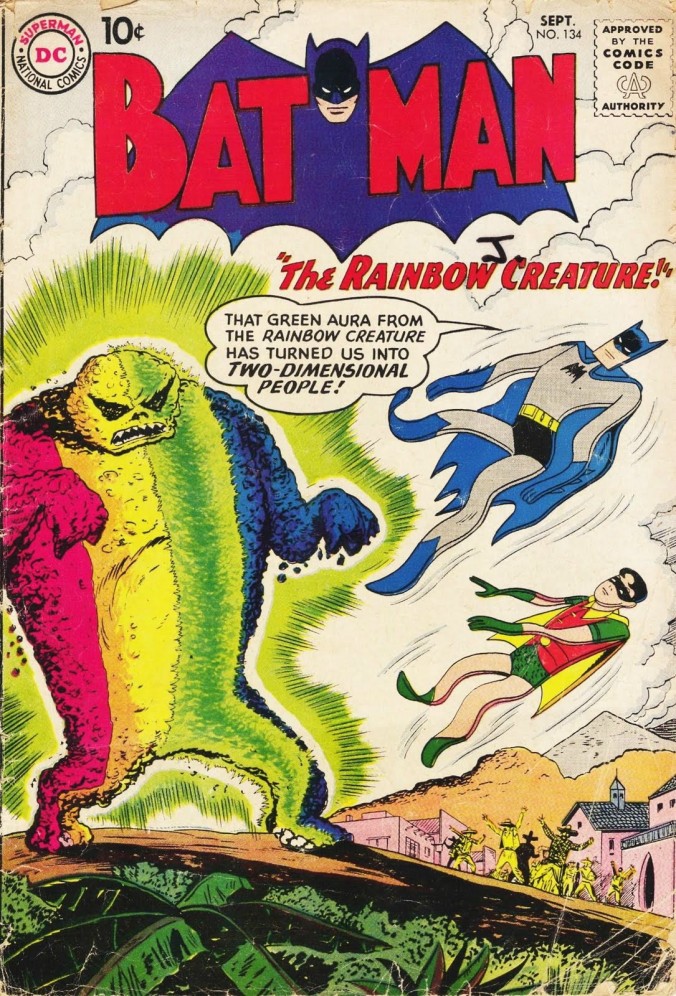 Between the Arkham games, the Nolan films and the TV show Gotham, people know Batman as the dark and gritty polar opposite to Marvel’s slightly more lighthearted romps. He’s super serious and deals with serious crimes concocted by seriously dangerous villains. It’d be hard to top Arkham Knight‘s dark and heavy tone without going to some sort of extreme. So, why not go in reverse and show Batman in a very different light.

Some people may not know this but there was a time when the adventures of the Caped Crusader were some of the goofiest things you’d ever see. During what was called the Silver Age of Comic Books, Batman temporarily got superpowers after being struck by lightning, was turned into a baby and a tiger on two seperate occasions and was so buddy-buddy with Superman that they probably met up for coffee every Thursday.

The Silver Age was filled with stories like these, and while the idea of a lighter, safer Batman may put people off, it leads to absolute hilarity (mostly thanks to hindsight). These stories were responsible for the 60’s TV show starring Adam West, a show infamous for how deliciously campy it was. The very first episode focused on the Riddler suing Batman over false arrests and has a scene where Batman gets drunk after his orange juice gets drugged. And who can forget the Shark Repellent Bat-Spray?

Imagine a whole game made of this goofiness. Brighter colours, silly dialogue, scenes even more outlandish and bizarre than anything Scarecrow or Mad Hatter could come up with. And it would be the perfect place to star some of the more over-the-top members of Batman’s Rogues Gallery that wouldn’t really work in the Arkham games. I’m talking about the likes of the Eraser (who dresses himself like a pencil and has an eraser on his head that can remove evidence of his crimes), Crazy Quilt (a painter/thief who, in an attempt to cure his blindness, can only see in blurred colours and was driven insane), and Kite Man. Yes, Kite Man. His gimmick is kites…… Kites….. Somebody make this game!

Okay, kind of cheating here since this technically wouldn’t be a Batman game but I know I can’t be the only one who would love to see a game centered around the Joker’s psychopathic sidekick.

While the Harley Quinn DLC for Arkham Knight was lacking to say the least, I found myself really enjoying the idea of not just playing as Harley, but seeing what was going on in her head. When you activated her version of Detective Mode, the walls and floor would be covered in deranged writing that symbolised her insanity and she would even have mental arguments with ‘Harleen,’ the person she used to be before Joker. Between this and Harley’s characterisation in the comic book tie-in to Injustice: Gods Among Us, the idea of a Harley coming to terms with Joker’s death and gradually trying to become a better person became incredibly appealing, especially in the comic where she wound up becoming kinda sorta buddies with Green Arrow and Black Canary.

While a game with her as the main character might not feature as much (or any) of the stealth aspects of the Arkham series, it’d certainly be an interesting one. It could even have some kind of morality aspects to it, where the player’s choices affect the outcome. Do you try and make Harley a hero in her own right in an attempt to redeem herself and escape the Joker’s hold or do you continue his legacy by becoming the number one villain in Gotham and leading his old gang? It’d certainly be refreshing after four games of playing as Batman.

Anyone remember a game called Spider-Man: Shattered Dimensions? It was pretty awesome as it saw four different iterations of Spidey teaming up to retrieve fragments of a mystical tablet, fighting familiar and not-so-familiar versions of his villains. So why not make a version of that game but with Batman?

Being DC’s flagship character means that Batman has taken on many forms in his 75+ year career. There has been the aforementioned Batman Beyond, a Batman who served King Arthur, a Batman who lived during the industrial revolution, a Batman that used magic, a vampire Batman and, in one universe, he was a Russian anarchist.

With all these different types of Batman, it’d be great to see one game that featured a bunch of them that you could play as. A lot of people aren’t as familiar with some of these alternate versions and probably wouldn’t invest in a game solely centered around one of them, so a title like this would be a great way to introduce them to these various incarnations while still starring the main Batman.

It’d also be pretty interesting to see different takes on Batman’s rogues gallery. What would the Penguin be like if he was living during the late 19th century? What would the Riddler be like during the reign of King Arthur? I feel like there’s a lot of creativity and fun to be had here.

Barring that, I’d be happy with a game that had Batman working together with Robin, Nightwing and Catwoman to fight crime in Gotham, building on the team mechanics that Arkham Knight introduced.

While it may be a while until we see a new Batman game, any one of these ideas would make me very happy. If not, I just hope that whatever comes next will be just as fun to play as the Arkham games were.