‘Despicable Me’ was one of those animated films that just passed me by. I took one look at a brief trailer and just went “Nope, looks garbage.” But then, I heard nothing but good things about it. I began to question myself – were the huddled masses even more gullible than I thought or was I being too presumptuous? Then the sequel came out and everyone went on about how it was even better. I decided to make it my mission to watch these two films and see just what made them so good.

Now, the plan was to cover both films in one article, but, to my surprise, I realised that I couldn’t cram everything I wanted to say into it, so here we are with part one of this look at these oddly fascinating films. 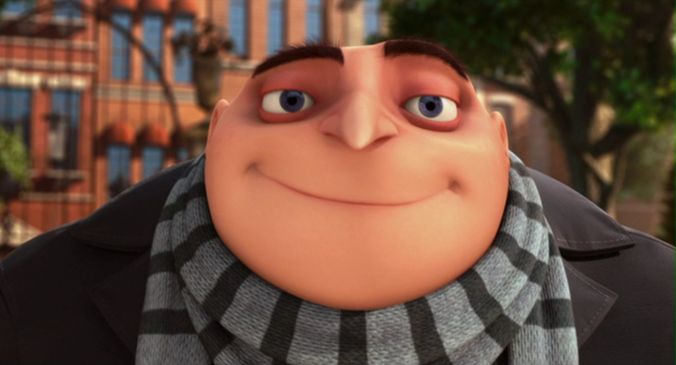 ‘Despicable Me’ focuses on a supervillain called Gru (Steve Carell), who has made quite the name for himself by pulling off crimes on a massive scale, until one day a new, younger villain called Vector (Jason Segel) steals the Great Pyramid in Giza. Not wanting to be outdone, Gru reveals to his Minions (small, yellow creatures that were designed to be marketable to little kids) his next evil scheme: steal the Moon.

One problem: the Bank of Evil is unwilling to give Gru the money to build a rocket until he steals an experimental shrink ray. Well, that’s easy. Until the shrink ray is stolen from Gru by Vector, whose hideout is impenetrable, as proven by Gru’s failed attempts to get in.

Fortunately, fate throws Gru a bone when he spots three little girls who are selling cookies for their orphanage be allowed in. Gru proceeds to adopt the three; Margo, the mature one, Edith, the tomboy and Agnes the OH MY GOD SHE IS SO GOD DAMN CUTE one, so he may steal back the shrink ray but, as you can probably guess, he slowly warms up to the girls and begins to embrace the idea of being a parent.

What got me immediately hooked into the film was the idea itself: what happens when a supervillain adopts three girls? Already, there is so much potential with that so I was very much interested in seeing how things would play out, especially considering the kind of character Gru is, because let’s face it, he’s not a very nice man. In the first five minutes of appearing, he spots a little boy crying over dropping his ice cream. Gru proceeds to feign sympathy, makes him a balloon animal and then pops it in the kid’s face. It’s hilarious, and it perfectly establishes his character. 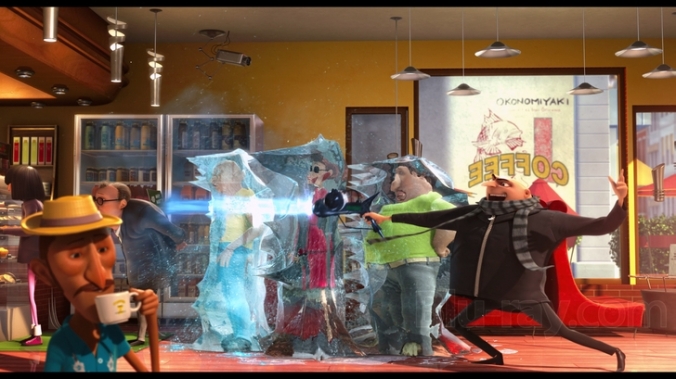 The decision to have a villain as the protagonist was a pretty smart move, as villains usually steal the spotlight in a lot of films, and I think they’ve nailed it with Gru. He manages to fit the mould for a villain character, as evidenced by how he treats the people around him (there’s a reason he carries a freeze ray with him at all times), especially the girls. These are admittedly his best moments – I just love seeing him act like such a dick.

However, it’s apparent very early on that there’s a sympathetic side to him. Let’s remember, this is a family film, and we can’t have the main character to a film that’s going to be primarily watched by children be completely evil. Personally, I’d have preferred it if he didn’t have the slightly tragic childhood (his mum was a bit of a bitch) but I never felt that it was tacked on or cheap. In fact, even before we see a flashback to his childhood, we see him speaking to his Minions, and he’s friendly with them, treats them well, he knows all of them by name – it’s a nice, subtle hint to his friendlier nature. 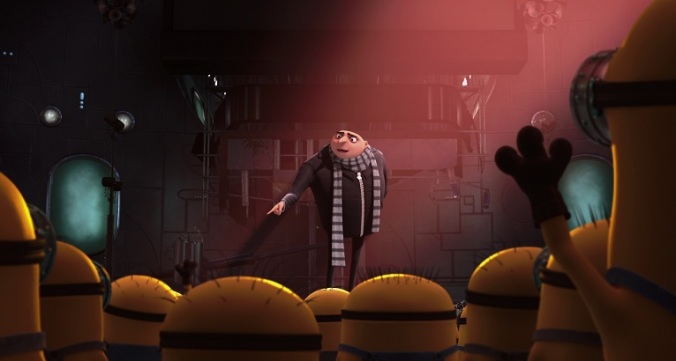 Hell, even his design is perfect. It manages to fit in two very different camps. When they need him to be evil, he looks frigging evil. But as he softens up and starts being friendlier with the girls, it’s a very natural change. Nothing about him physically changes, which I think is great and this blend makes Gru a very appealing character, both to children and adults.

Speaking of children, the girls that Gru adopts deserve special mention. There’s always that huge worry that the little kid characters will be the most annoying part, but they couldn’t be further from it. While none of them get as much development as Gru (except for maybe Margo at the very end), they’re all lovable in their own way and have distinct personalities. They may be obvious and basic, but they still have some charm to them.

Margo, as the eldest, is constantly looking out for the other two but is never overprotective. She’s also the only one who manages to deal with Gru’s early attitude, spouting typical sarcastic quips a kid would say.

Edith, like I said, is your typical tomboy, but there were a few little nuances I noticed that made me warm up to her, despite not really being all that interesting. She clearly doesn’t mind getting her hands dirty, yet she still willingly takes part in more traditionally girly things like ballet and tea parties, which I found rather interesting. 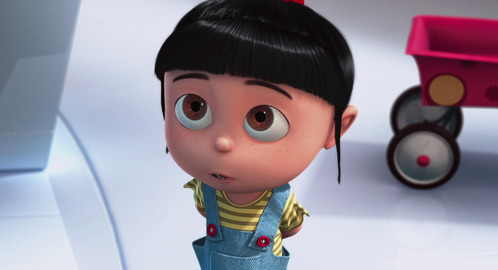 And there’s Agnes… she’s just adorable. Major props need to be given to Elsie Kate Fisher, who was seven at the time the film was released. She just nails Agnes perfectly. There’s nothing else I can say; she’s just fantastic.

As for the humour, it had a really nice balance. There was nothing that made me properly laugh out loud, but there were plenty of gags that made me giggle. Aside from Gru’s many misdemeanours, you had some slapstick for the kids and some verbal jokes for the adults, as well as a surprising amount of dark humour, particularly from the orphanage and its owner, Miss Hattie. I will never get over the Box of Shame. Personally, the fact that Gru is allowed to live in a suburban neighbourhood despite his villain status being public knowledge makes me laugh with disbelief. 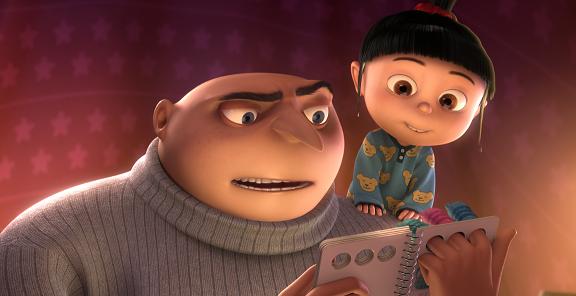 The film also has plenty of emotional moments, courtesy of Gru and the girls but it’s not beginning of ‘Up’ or ending of ‘Toy Story 3’ levels of emotion. You won’t be clutching at your heart weeping but you will go “Awwwww.” It’s more cute than anything – not that there’s anything wrong with that.

Is there anything I didn’t like about the film? Well, the Minions I never found to be THAT funny; their main joke seems to be that they speak gibberish and make funny faces, and I hate how they’ve been designed purely to be marketed and make money, but they never veered on annoying or obtrusive. Plus, their relationship with Gru kept them likable and I did get the occasional chuckle from them.

I think Gru’s mum was a bit of a pointless character. She rarely appeared and didn’t really contribute outside of flashbacks. I kept thinking she was gonna get some kind of comeuppance or development regarding her treatment of Gru when he was a kid, but no. I think if you took out all her scenes except for the flashbacks, the film would not change a bit.

All in all, ‘Despicable Me’ is not a ground-breaking film. One critic said that you won’t feel any different after viewing it and it’s true. But this does not mean ‘Despicable Me’ is not worth your time. It does what it aims to do – be entertaining. And with such a great premise, I wouldn’t mind seeing more of Gru and his girls. 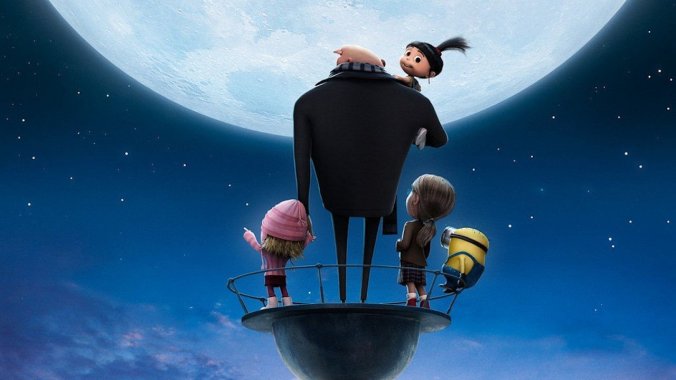