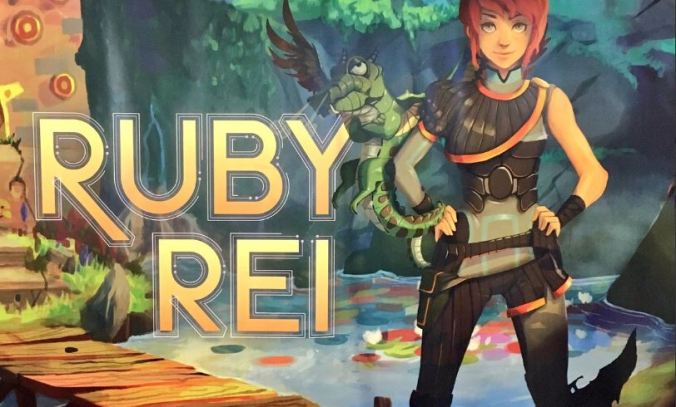 Earlier this week, I was lucky enough to be able to attend the launch party for mobile and tablet game Ruby Rei, developed by London-based team Wibbu. Since I was able to get a chance to play the game and see what it’s like to be an actual journalist, I figured I’d write a short piece about the game itself and spread awareness of it.

For those who don’t know, Wibbu specialises in creating educational videogames; you know, the kind of games that actively try to teach you something. Nowadays, when we think of “edutainment,” we think of very basic Flash games and the like; the kind that exist purely to teach and trick kids into thinking they’re having fun just because there are cute pictures of frogs involved.

I remember when I was a kid, I had some PC games to help we with my maths, literacy etc. that were dressed up in adventure stories about kids solving mysteries and exploring jungles and the like. They had plot, character and, overall, just charm to them, and they’re something I don’t think are really around anymore. Ruby Rei, however, seems like Wibbu’s attempt to bring that method of teaching back. 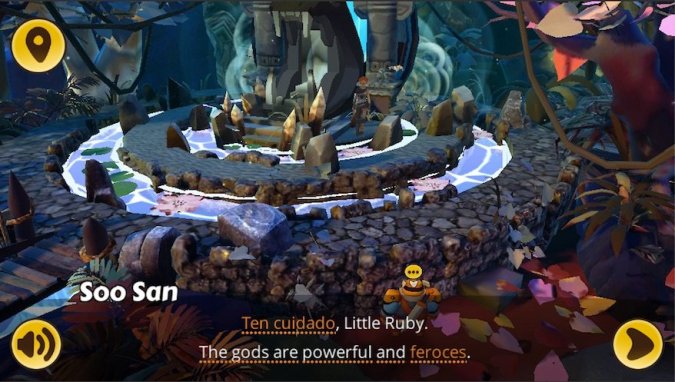 But what is Ruby Rei actually about then? Well, plot-wise, it focuses on titular space explorer, Ruby Rei, crash landing on an alien planet and going on an adventure to find her missing robot friend, all the while helping and befriending all manner of characters on the way. As for the purpose of the game, it’s meant to help you learn how to speak another language. At the moment, there are options to teach Spanish for English speakers, English for Spanish speakers and English for Portuguese speakers (with plans to include Mandarin for English speakers later in the year).

As someone who learnt two languages at secondary school and found it dull as all hell, I most likely would’ve been more inclined to try if something like Ruby Rei was used as a basis for teaching it. See, Ruby Rei has no lesson plan. There’s no tests, no grading system; just a casual adventure story that happens to be in a different language.

Whenever a dialogue box pops up, you’re allowed to study it for as long as you want. If you don’t know what a word or phrase means, you can tap it and it’ll switch to your native language. There’s full voice acting, meaning you can hear how certain words are pronounced and, if you need to hear it again, you can have sentences be repeated as many times as you like.

Ruby Rei allows you to do things at your own pace, and never reprimands you for taking longer than usual at any specific point. At no point does it ever feel like you’re being taught; the game literally drops you in with no tutorials or anything. You’re just left to your own devices. Not like you need tutorials; you’ll get to grips with how the game plays very easily. For the most part, it’s Ruby moving through linear areas with the occasional puzzle thrown at you, whether it’s moving rocks to unblock a river or stepping on switches to provide power to a machine. It’s all very basic stuff. 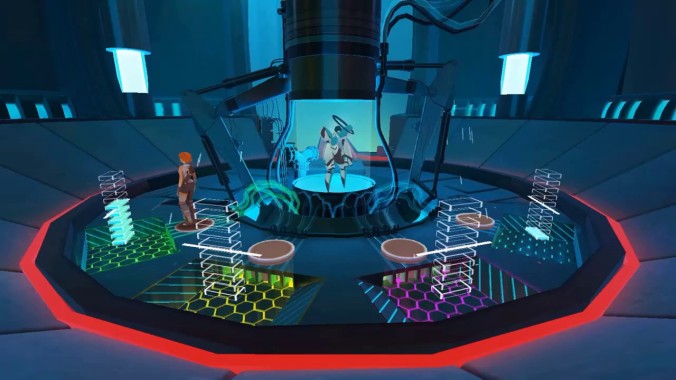 Ruby Rei is very much perfect for people that want to learn another language but might have trouble doing so via conventional means. There is nothing more boring and/or off-putting than reading the same pages of a textbook over and over, or being given tests to do. The human mind is easily distracted, especially nowadays (lousy Internet) but Ruby Rei avoids that pitfall.

There’s a story, there’re characters with personality and voices; nothing revolutionary or super in-depth but certainly with more detail than a lot of official school books. Wibbu haven’t just slapped some generic colourful images in or some average story about asking for directions to the library. There’s a real attempt to both tell a story and help people learn and they have successfully disguised their teaching methods in a videogame’s clothing.

I’m not a teacher so I’m not sure how effective this could be with children but if you’re the kind of person who wants to learn another language but struggles with more “traditional” methods, Ruby Rei just might be the answer you’re looking for, especially if you’re self-motivated. It’s only £2.99 so it’s not like you’re losing much by giving it a go. But while I did praise the lack of tests, grades etc. earlier, it also means you aren’t really rewarded for progression or improving. Ruby Rei may be a game, but those of you who like earning achievements or trophies or the like will find little to stimulate you.

With any luck, though, Ruby Rei could bring about a new age of edutainment, and I mean actual edutainment. Videogames have already come a long way in the past few decades and while using them to teach isn’t something new, we might hopefully see more effort put into them. Games that set out to teach and entertain in equal value; games that make people want to play again and again, and make them actually enjoy the act of learning. Wibbu are already dedicated to the cause, and I’m curious to see where they go with this and if other developers follow suit.

One thought on “Ruby Rei – A New Benchmark for Edutainment?”